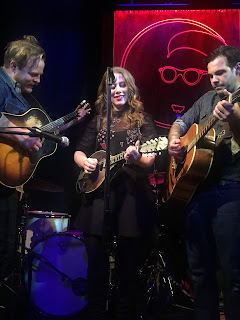 Maybe us folk south of Hadrian’s Wall are allowed a smidgen of jealousy concerning the January offering that Celtic Connections gives the good people of Glasgow in one of the year’s darkest months. However, some compensation exists in those American artists that choose to build in a few English dates during this mid-winter visit. In fact, The Lone Bellow has extended this to a handful of continental Europe shows as well, as they continue the quest of promoting their latest album through the most connective of mediums: live gigs. First stop in 2018 was a sold out night in Manchester’s Band on the Wall venue and a supreme opportunity to share a scintillating performance with fans old and new. Led by the effervescent and theatrical front person Zach Williams, this was a gig to blast the New Year into perpetual motion and set the tone for bands of a similar ilk to follow.

This was my first time seeing The Lone Bellow live, and while similarities to Americana bands Dawes, The Bros Landreth and Sons of Bill did exist, nothing prepared me for the James Brown-esque enthusiasm of Zach Williams. Pumped with gallons of heartfelt and appreciative soul, he led his band in the most exuberant manner, before ultimately giving in to temptation and completing the encore in the middle of the crowd. Prior to this, the five piece band had served up  a near seamless diet of anthem-laced alt-country rock, fired by stirring guitars, driving rhythm and a touch of delicate mandolin. Lead guitarist and integral part of the core band trio, Brian Elmquist, musically drove the live performance, relentlessly switching instruments and showing himself as more than a capable vocalist with an encore lead on the acoustic embraced ‘Watch Over Us’. 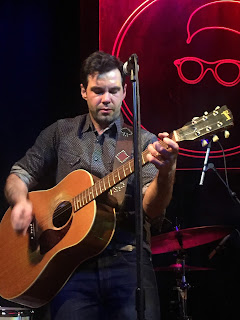 This was one of four moments in the show where drums and bass temporarily departed the stage, to leave the core trio of Williams, Elmquist and Kanene Pipkin to re-enact the pin drop rehearsal of taking the heat out of the moment with a stripped down sound and single mic. This was equally as important to the success of the show as the waves of frantic rock ‘n’ roll with Williams tub-thumping his heart in awe of the electricity being generated in the room, while forever being humble to the outpouring of adoration.

The set list spiralled out of the band’s three studio albums. Not surprisingly, the most recent record WALK INTO A STORM featured highly with the triumvirate of ‘Deeper in the Water’, ‘Time’s Always Leaving’ and ‘Come Break My Heart Again’ scaling the gig’s summit from a personal viewpoint in the run up to the finale. Popular opinion would have probably leaned towards ‘Green Eyes and a Heart of Gold’ from their self-titled debut album or the soul bearing 100% unfiltered ‘Teach Me to Know’ in its impromptu setting and format. From the opening bars of ‘May You Be Well’, through the rock overlays of ‘The One You Should’ve Let You’ to the tender vocals of Pipkin on ‘Call to War’, the relentless motion of sincere songs rarely drew a moment’s breath, or any remnants of an extended verbal interlude. 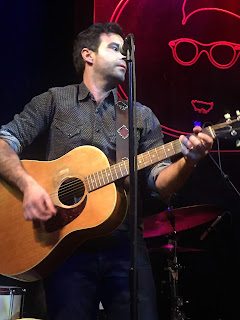 While The Lone Below has drew many accolades since forming in New York City around half a dozen years ago, including signed status and an Americana Music Association award nomination, there are still swathes of potential in the UK to conquer. This Friday night in Manchester was a happy hunting ground of mutual appreciation, but there is a popularised streak to the music and live show that should lead to a wider engagement on a more frequent basis.

Clearly, Zach Williams is the driving force of The Lone Bellow, but one that would surmount to very little without the input of his two influential lieutenants. While there are probably slicker touring bands on the circuit, few can match the intensity of this evening’s performance, and purely on this basis The Lone Bellow should be added to any one’s ‘to watch/see list’ if they have been evaded in the past. Consequently, if WALK INTO THE STORM got lost in the scrum of stellar country, folk and Americana releases that invaded the musical landscape in 2017, take a minute to check it out, as it is not going to disappear anytime soon.

Local five-piece Manchester band Tragicomics provided the support for the evening with a thirty-minute set of pulsating alt-country rock. They only had one mission, and that was to play short, sweet and hard, thus giving those early arrivals an opportunity to warm up for the energy due to be generated later from the headliners. On this account, The Lone Bellow did not disappoint and like so many nights when top quality Americana rock bands grace us with their presence, dissatisfied customers were as scarce as the proverbial… You get the drift; it was a damn good night of live music.