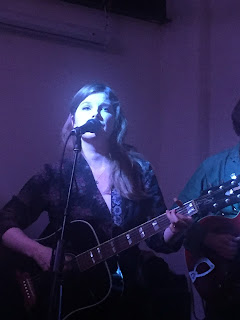 Although Miranda Lee Richards has had a lengthy association with the music industry to varying degrees of success, the last eighteen months has seen something of a renewal. This has had a particular focus in the UK including a tie up with label Invisible Hands Music and the follow up of intent to back a pair of album releases with overseas trips from her California base. This return to Birmingham had a somewhat low key feel to it, but evidence was rampant to what great music she is producing at the moment. Many of the alluring facets of her recorded material were successfully reproduced in the live environment especially the ethereal feel, beautifully hazy vocals and a three-pronged West Coast wrapped guitar attack.

Miranda led the way making her acoustic playing punch above its weight alongside the majestic electric contribution of her key stringed accomplices Randy Billings and Joe Woolley. The advertised trio morphed into a quartet with the harmony backing vocals of Samantha Lea Smith as Miranda introduced her hour-long set as essentially a showcase for material from the last two albums. There did appear to be a slight bias towards the recently released EXISTENTIAL BEAST, especially as this was likely to be an introductory listen for most folks attending this Ort Café show.

However little time was wasted in sharing the best of last year’s album ECHOES OF THE DREAMTIME with the excellent ‘Tokyo’s Dancing’ taking the prized opening slot and precisely positioning the mood and tone for the set. Generally Miranda kept the background chat to a minimum with only very brief song introductions such as the country sound to ‘It Was Given’ and the trip-inducing qualities of ‘Colours So Fine’.

It didn’t take long into the set to move into the newer material with ‘On the Outside of Heaven’ featuring early on. ‘Lucid I Would Dream’, ‘Autumn Sun’ and title track ‘Existential Beast’ effortlessly transferred the divinity of the record to a quirky venue in the inner city suburb of Balsall Heath, trailing just two tracks, which proved to be highlight of the set. ‘Oh Raven’ was announced as a medieval folk piece and rose like a beacon on the evening. Album opener ‘Ashes and Seeds’ was nearly missed as cut off time approached but it was just squeezed in to the extent of flourishing brightly whilst projecting Miranda as a serious writer of an enticing folk song. 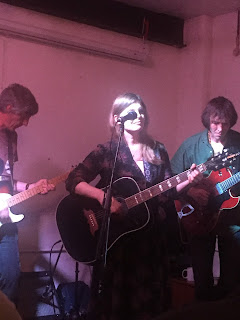 Sadly time constraints probably lent heavily on not playing the eleven minute epic ‘Another World’ that not only closes the new record, but also prompts a transfixed thought mode. While not being sure to the extent that this track generally features live, it presents a brave challenge that in my opinion will come off. Maybe there is also room in a different setting for further insight into the intriguing themes, inspirations and line of thought that apply to her music. This certainly was a gig where the message was predominately in the music, which fair enough is the fundamental of the art. Miranda finished her set by stating that she will be back later in the summer with a full band in tow. This will inevitably add a further dimension to the sound, but on a pre-gig assumption that this event would be on a more acoustic footing, the bar was raised to a pretty high level for subsequent shows to better.

In line with the promoter’s motivation to provide a platform for local independent artists, two solo performers were granted half hour support slots to support Miranda. Each focussed on a different strand of music, with Stourbridge-based Ryan Sparrow more pro-active in promoting his innovative acoustic style than the fluctuating electric vibes of a guitarist billed under the name My Autumn Empire who followed.

Engaging with the music of Miranda Lee Richards over the last eighteen months has been an adorable delight and this first time seeing her live went a lengthy way to exceeding expectation. If you’re seeking an artist capable of making seductive and encapsulating music wrapped in a warm blanket of indie folk and West Coast jangly rock, then look no further. While we wait for a UK return, there is ample space for EXISTENTIAL BEAST to prosper and ECHOES IN THE DREAMTIME to have reinvigorated second phase.