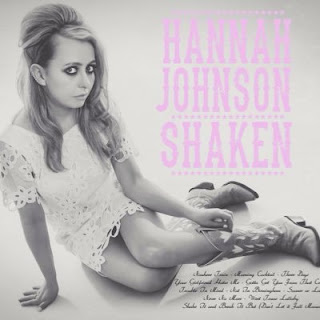 From Toy Heart to Broken Heart, the music of Hannah Johnson has always been rooted in the past and free of any compromise. However, Hannah frequently rejects the populist retro revivalist path, preferring to come across as an astute historian hell bent on being a contemporary custodian of a timeless style. In a first major solo outing since taking an alternative path to what formed her first decade of making commercial music, Hannah has teamed up with a number of established players to conjure up a highly infectious collection of tunes perfectly encapsulating the soul of traditional country music. SHAKEN can take its name from a multitude of experiences of both sides of the emotional divide, but in this instance it clearly houses eleven cuts that fully succeed in carrying out the mission statement of an artist driven by her own heart and instinct.

While local gigs are generally billed as Hannah Johnson & the Broken Hearts, a significant switch for the album release is to slim down the artist title. Hannah is though joined on the album by her resident Broken Hearts: father Stewart on his distinctive pedal steel and Chris Shirley on electric guitar and tic tac bass. To boost the authenticity of this album, Hannah headed to Austin Texas from her home in Birmingham UK to record eleven songs at Ameripolitan Studios to tap into the local talent; an apt location in these interesting times for the fight to own the soul of real country music. With the right ingredients, it comes to little surprise that the contents of this record are spot on, making it a valuable release, especially when you’re seeking for such exponents on the UK music scene.

It is of further little surprise when you delve deeper into the record to identify that the tunes consist of three original songs and the remainder interpretations of work from a bygone age. The word ‘cover’ doesn’t seem appropriate in this context as the songs are carefully selected, not driven by courting popular appeal and providing a perfect fit for how Hannah wants to portray this current phase of her career.

While the names Willie Nelson, Patsy Cline and Roger Miller hardly have a negative impact on a country record, the song selection avoids the usual suspects and if anything, getting to grips with this record can turn into a historical investigative exercise. Another successful aspect of this album is the way the three originals blend into the older material thus giving credence that Hannah can still excel in this field. (‘The Captain’ remains a tremendous piece of song writing from the Toy Hearts days). ‘Nowhere Train’, ‘Morning Cocktail’ and ‘Your Girlfriend Hates Me’ are strategically planted within the first four tracks in the running order, with the first one initially coming across as the strongest of the trio.

Elsewhere on the album, a version of Charley Patton’s ‘Trouble in Mind’ and a delightful rendition of ‘West Texas Lullaby’ make substantial cases for being high spots. Standards rarely dip throughout the near forty-minute spin of this album, which gets its UK bow in early July before Hannah heads to Austin to push it further including a launch night at the famed Continental Club.

Alongside Hannah’s trademark husky vocals and the stellar complete line up of pickers, players and harmonisers, credit must also be guided towards the pedal steel playing of Birmingham’s own legend in this field: Stewart Johnson. His upfront backing role on this instrument has always been a delight to witness, especially when his two daughters took the Toy Hearts general sound away from Bluegrass and into a heavily Bob Wills influenced Western Swing direction. Of course, the music of the Texas music pioneer is celebrated on this record with a version of ‘Sooner or Later’.

SHAKEN is no record of ‘work-in-progress’ status, it is Hannah Johnson doing what she does best and very well. It is ready made to jump onto your turntable, slide into your CD player or find a prominent position on your device (filed under ‘country’ of course).