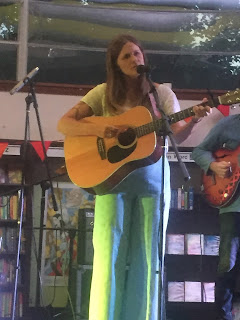 Thimblemill Library is in a current phase of interacting with musical art to the extent of opening its doors to a host of touring artists. Alongside marrying literary focus with that of the lyricist, embracing the world of cultured protest and engaging with left field ideals, you can now add library ambience providing the backdrop to a most beautiful sound. The latest artist to grace this art deco building hails from Nashville Tennessee and commandeers the most respectful of audience attention through a haze of serene country folk songs evoking a state of meditative relaxation. Erin Rae welcomed a raft of new fans to her music after this first visit deep into the heartland of the industrial West Midlands, ones sure to remain with her when she returns.

Flanked by her Meanwhiles, in-demand Nashville players Dominic Billett and Jerry Bernhardt, Erin set about executing her distinct style and breezed through a couple of blissful sets. There is an element of adjusted expectation and sensory alignment required to fully acquaint oneself with the tone of the music. In fact, it took deep into the second set for the sweet spot to be reached, and this was very much in the domain of the listener in light of Erin’s consistent approach. The moment of enlightenment peaked in the final three tracks of the show with ‘Minolta’, ‘Monticello’ and ‘Rose Color’ successfully leaving a mark of an unwanted end.

The unassuming and softly spoken Erin hails from 21st century Nashville, but there is so much late 20th century California in her sound and vision. Close your eyes and drifting Laurel Canyon clouds float around, open them and the surroundings become more tangible. Her partners help out enormously offering the ‘less is more’ ethos to decorating her songs with the perfect soundtrack. The echoes and notes were a little different from when the pair last visited the area as part of the Andrew Combs band in May. Dom had the rhythm in the palm of hands on drums and bass keys, while Jerry optimised the electric guitar output required to supplement Erin’s crystal vocals. 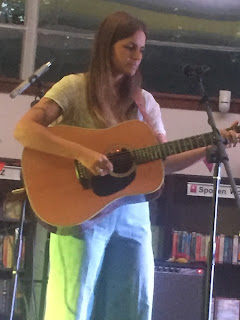 As was expected, the vast bulk of material used came from last year’s full album release SOON ENOUGH, which was brought to life in the UK via a tie up with Clubhouse Records. Current signals in the media of Erin advancing forward with her next record were confirmed through brief between-songs chats and the playing of the new song ‘Wild Blue Wind’. Despite a wide ocean of available classic material from a bygone era, seemingly to be Erin’s influence, the preference leans heavily on the original song. The one instance where the work of others was celebrated sent the mind ticking over in seeking more information on a track from the 1970s by Judee Sill titled ‘Jesus was a Crossmaker’. This song was tackled in a seamless way to each other track which included introduced numbers from the album such as ‘Clean Slate’, ‘Pretty Thing’, ‘Futile Attempts’ and ‘Light’.

There was a slight adjustment to the opening act for the evening with the performance of the duo Ashland being slimmed down to a solo slot from Dave Sutherland. His regular partner Kathryn Marsh was afflicted by the dreaded curse of all vocalists on performance day: a lost voice. Nevertheless, the show must go on and Dave dug deep into his experience, song arsenal and professionalism to deliver an excellent half hour, helped only by a borrowed effort from Rodney Crowell plus a trusty guitar.

Erin herself highly values the forty-year-old guitar that gently strums to the beat of her songs and began life in the possession of her father. She cuts the pose of the natural singer-songwriter born to extract every ounce of the gift bestowed on her for a willing audience. There is an element to her music that does command the right environment for it to prosper. Get this wrong and you will struggle; get it right and a blissful world opens up. Thimblemill Library, an artistic gem on the Sandwell-Birmingham border, created such an environment for Erin and the Meanwhiles to put on a very individual performance and spin a web of serene music on an audience fixated for the moment.