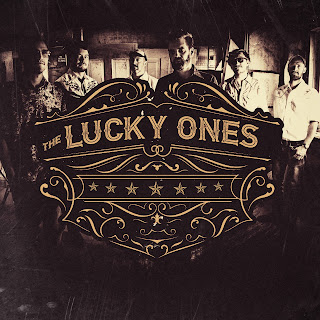 Music of the far west of the North American continent can take many forms. Geographically you can tap into sounds from the Arizona-Mexican border, move north through the western states right up to the Canadian border where the exports gets a little thinner. Keep on going through the Canadian provinces of British Columbia and Alberta before reaching the far northern outpost of the Yukon. At that point you would think the musical exports grind to a halt, but The Lucky Ones are set to challenge that theory with the European release of their self-titled debut album.

This five-piece combo drawing on the trusty quartet of guitar, mandolin, fiddle and banjo to fine tune their country sound settle on laying out eight original tracks to show the wealth of music from the most unlikely of locations. While the site and back story are good marketing points, especially when looking to sell your music in far away lands, the ultimate test is the quality of the gifts offered. On that account, there is little to worry about as a band of local heroes toss around a rich slice of the Canadian north awash with stories and old time country tendency.

There is a feeling of rural remoteness and the struggles that entails with titles like 'Since the Farm Got Sold', 'Snow Flakes in the Sun', 'Waitin' on a Paycheque', 'Wish' and 'Drunken Goodnight' reflecting the mood of the music. The tempo undulates in line with the contours of the land alongside the roller coaster of emotion as pacy foot tappers blend into slower numbers, more often dependent upon whether the fiddle is used to mourn or invigorate.

'Fool's Gold' opens the set with an optimistic moderate beat and expresses a sense of forlorn hope. At this point you feel in the safe hands of stellar story tellers, solid songs, good tunes, fine playing and vocals reflecting the sentiment of the moment. 'Snowflakes in the Sun' dabbles in a bit of bluegrass and cocks an ear to what the band can do when depressing the accelerator. 'The Old 98', which samples an acknowledged borrowed melody, is a straight up country belter that any pretenders to the crown would gladly like to record. 'Waitin' on a Paycheque' holds court at the half way stage pleading for a little barroom sympathy when things slow down a touch, while inducing a shared singalong to the chorus.

'Everybody Dance' gets the second half underway with a hint of irony and a sense of falling to your knees. If you're looking for a pick me up in the next track, 'Since the Farm Got Sold' at least ups the tempo and reverts to a little frivolity to raise the spirits from more turmoil by adopting a resolute stance. The picture continues to be bleak as 'Wish' projects thoughts from a moment of desperation and represents the album's deepest mournful pit. At this point you are willing for an optimistic closer and 'Drunken Goodnight' duly obliges in tempo even though the content is hardly a bed of roses.

The Lucky Ones have framed the art of a top quality country album with their debut release. Using a kaleidoscope of moods, feelings and motion, they have taken the core tools of a story, a raw old time sound and an innate songwriting craft to showcase the traditional music of the Yukon in a bright northern light.