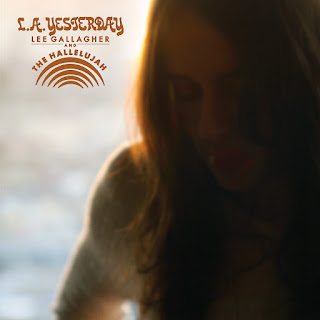 www.leegallaghermusic.com
Long hair, sunlit background and a title of L.A.YESTERDAY gives you a huge hint of what to expect before your eyes leave the cover of this album and pass the baton of discovery onto your ears. Further tips roll out with track names such as 'Highway 10', 'Lullaby for the Acid Queen' and 'California Divide' coupled with the added background information that Lee Gallagher headed west to fulfil his rock 'n' roll dream. He subsequently made San Francisco his home and ventured south to its west coast rival to record his second album, which of course lent part of the title. If at this point you are expecting a nod to a throwback era where sounds from the twin West Coast metropolises twisted the axis of rock 'n' roll on its head, a treat lies ahead.
Lee Gallagher and his band known as the Hallelujah have used the template of this ten-track album to update a brand of rock trailed by pioneering artists of the late 60s and early to mid 70s. By fusing singer-songwriter sentiment with a rock style lounging between laid back road driven country and conventional hard edged guitar riffs, an evocative aura consumes the listener in rapturous portions. Gallagher uses every  angle of his archetypal rock pitched vocals to conform to the blueprint of updating the past thus narrowing a half century gap between iconic 1970 and reflective 2020.
L.A. YESTERDAY rocks enough to keep guitar junkies happy while never losing sight that maturely constructed songs will lure in the wider Americana community who like the hardened state alongside a flexibility to mix sensitive balladry with strategic electric outbursts. Gallagher opens and closes proceedings in a sense of refined enterprise with 'Highway 10' and 'Rollin' Out' to keep things in check. Elsewhere the heat fires up most in the closing parts of 'Astral Plane Blues' and similarly in the following track 'California Divide'.
If you risk attracting a throwback perception, the key is to keep the sound fresh. Lee Gallagher shrouds his music in a coat of cultivated sophistication to guide the listener on a parade of renewal rather than classic West Coast regurgitation. L.A.YESTERDAY has one foot loosely planted in the past and the other firmly planted in the present.
This blog endorses Bandcamp especially for overseas folks to download music where the physical acquisition can become a costly and often impractical purchase. $7 plus a currency conversion and likely tax is a snip for such a fine album.
Posted by David at 19:52