Album Release: Saskia - Are You Listening? 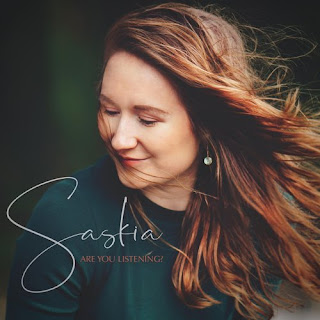 www.saskiagm.com
ARE YOU LISTENING? is the first album English singer-songwriter Saskia Griffiths- Moore has put out with a slimmed down recording name, a move in line with securing a two album deal with America's Susanne Marcus Collins Foundation inc. Maybe a link and renewed purpose - who knows? This album is a follow up to last year's BAEZ, DYLAN AND ME release which played its part in helping promote the talents of a resourceful and enterprising artist on the folk and acoustic circuit. Saskia has used the first part of the new deal to re-issue eight tracks from her back catalogue, coupling them with a pair of new compositions and a cover of 'Hallelujah', which while hardly earth shattering retains the song's beauty with a refined vocal touch.
'Best of You' and 'Come Comfort Me' are the two new songs for those previously acquainted with her work, although one aim of this record is to turn the other eight into new songs for a wider audience. Both these hit the mark in terms of serenity and a graceful sense of cultured panache.
As indicated, the remainder of the album is lifted from previous recordings under the name Saskia Griffith- Moore. Giving the track 'Are You Listening?' the dual responsibility of opening and naming the album pays off by placing the best of Saskia up front for all comers to see straight from the off. Of course this runs the risk of peaking too soon, but a smooth and consistent song range ensures dips do not materialise. The opposite to dips are little moments that raise the bar and 'Write Me a Song' is one such occasion in the heart of the record, although different ears could make equally compelling cases for numerous others.
A sparse and sensitive production angle ensures the majestic side of Saskia's controlled song delivery gets a clear run. Regardless to whether these songs adapt a renewed stance in their re-issue, and judgement here is the sole domain of the pre-acquainted, they prosper and flourish to fresh ears
Slimming down the recording name has worked wonders for Yola, so if Saskia achieves only a fraction of her success and recognition it will be a smart move. Ultimately it is the strength of the songs and quality of performance that will judge an artist's merit and Saskia is well equipped in these fields to continue her ascent. Soft acoustic vibes succinctly aligned with a vocal prowess of cut glass eminence go a long way to define this album. ARE YOU LISTENING? is best savoured in life's quieter moments with an underlying soothing presence perfectly earmarked for fans of folk and acoustic music.
Posted by David at 22:20