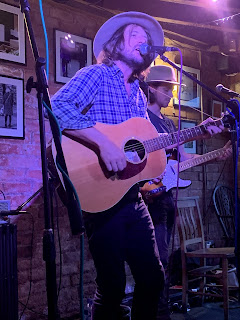 Lady Antebellum may well have recorded the song ‘Own the Night’, but the sentiment was well and truly with Lachlan Bryan as he moved from festival regular to gig headliner. As much as Lachlan and his many other friends have played their heart out across numerous sets at Maverick over the last three years, there is nothing to beat giving your audience full focus and ultimately ‘owning the night’. This was certainly the case when gracing the delightful surroundings of the Kitchen Garden in Birmingham as part of a short English tour.
Lachlan Bryan and the Wildes have been operating as a band Down Under for a number of years. The horizon has switched to Europe in recent times with its latest incarnation joining up with fellow Aussie Imogen Clark for the second successive year to start spreading their wings further afield from the festival scene. The full breadth of available time was grasped as Imogen delivered an appealing forty-minute opening set before Lachlan took over the mantle to extend his set to over two hours. Value for money was a no brainer tonight.
The one constant was the presence of current Wildes band members Sean Ryan and Riley Catherall across the evening as they played bass and electric guitar respectively on both sets. We were even introduced to Riley as a solo artist when Lachlan stepped aside to give his newest band member a precious opportunity to share his own singer-song writing skills. 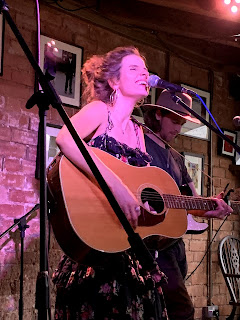 On an evening when Lachlan launched his on-stage chat by quipping “we must be the only happy Aussies in Birmingham tonight”, we learned many things apart from the obvious re-affirmation of what good artists we were in the presence of. First up, Lachlan and Sean did play the nearby Hare and Hounds fourteen years ago when members of a travelling Aussie indie band. Secondly, Lachlan was a talented schoolboy cricketer good enough to play as a club pro in the Yorkshire leagues (a skill that may have come in useful for the Australian cricket team in the Edgbaston World Cup semi-final earlier in the day). From Imogen’s opening set, she revealed an exciting upcoming opportunity to tour with Clare Bowen in the US that will be of great benefit in expanding her musical reach.
Imogen writes accessible and personable songs, all underpinned by a steely interior and a desire to drive forward her song writing capabilities. She used her opening slot to share recent and older material including the title track from her latest album COLLIDE and key number ‘High Tide’, alongside a glimpse to what the future holds. Perhaps the highlight of the set was a new song yet to be recorded that showed significant development in penning songs with a strong sense of resonance. Sheepishly, she shared a cover, but a lovely version of Leonard Cohen’s ‘Chelsea Hotel #2’ added value to the evening. Proclaiming that her head is brimming with new material is good news for fans of the articulate song, and it is suspected that we are going to hear a lot more from Imogen Clark in the future. 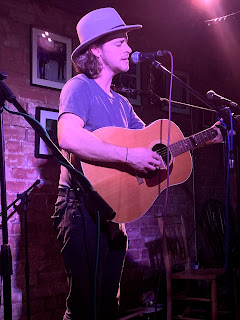 You can pin a multitude of labels on Lachlan Bryan and not be far off the mark. So take a pick from rock ‘n’ roll, folk, country (perhaps more of an alt persuasion), Americana (or its antipodean cousin ‘Australiana’) or any other contemporary roots cliché. More importantly, he writes damn good songs, delivers them with impeccable sincerity and imparts a cynical wit to counter a maddening world. Anybody who names his album after a classic mid-track lyric ‘some girls (quite) like country music’, opens a passionate song with the line ‘women do what you must, because there ain’t a man in this world you can trust’ and co-writes a song with the great Kim Richey is operating in a lofty musical stratosphere.
The Kitchen Garden, recently described by Irish Mythen as a venue with ‘big heart’, was in ultra-listening mode as a string of super songs permeated the air. ‘Portrait of the Artist as a Middle Aged Man’, ‘I Hope That I’m Wrong’ and ‘You, Me and the Blues’ add titles to the three songs implied in the previous paragraph. Joining these as set standouts from a growing list were concluding pair ‘Careless Hearts’ and ‘The King and I’. Additionally, sampling and referring to Willie and Waylon in ‘The Basics of Love’ goes down well here. Stories also grew with increasing interest as evidenced in the voodoo influenced ‘Down In New Orleans’ and relationships reflected upon in ‘The Secret I’ll Take to My Grave’.

By the close of the show, we had learned far more about Lachlan Bryan than any amount of festival sets could reveal. There goes the power of the gig. Final good news revealed that the European adventures are going to continue in 2020 with a base that will only grow with renewed promotional vigour. In ‘owning the night’ of Thursday July 11th, Lachlan Bryan and friends did all a touring artist can hope to do, but did it mighty well.
www.lachlanbryanandthewildes.com