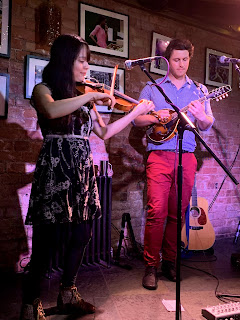 Canada’s Maritime province has a rich history of roots music. Indeed this style is one of that nation’s proudest exports and the UK is often a fertile zone for hosting these lauded touring musicians. The current members of The Bombadils may have their origins scattered far across Canada’s vast land, but their current residency in Halifax Nova Scotia is right at the heart of the Atlantic junction. Sarah Frank and Luke Fraser have followed in the steps of many of their compatriots in finding the UK a welcoming home for acoustic roots music. It helps that they are both exceptional musicians majoring on fiddle, guitar and mandolin, with the insightful knowledge of the banjo featuring prominently back home. Hot footing from a couple of well-received sets at the Maverick Festival, The Bombadils called into Birmingham’s Kitchen Garden, a venue renowned for supporting music of a similar persuasion.

On a full packed evening of folk and roots music, Sarah and Luke sailed through a couple of sets with consummate ease straight after a re-focussed Josienne Clark had filled a call to play the opening slot. She had responded to the invitation from Sarah despite the two not actually meeting in person. With the audience including many fans of Josienne’s previous duo work with Ben Walker in full approval with the booking, those present settled down to obtain a glimpse of what the future holds for this talented vocalist. 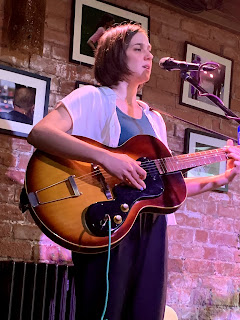 The most distinct feature of ‘Josienne Clark solo' is the guitar. Sounds obvious I know, but serious readjustment is required for those accustomed to seeing her pour heart and soul into a compelling vocal style. Things are beginning to move into place with this venture as the signing to Rough Trade records is still playing a role in getting music out. A new album is about to get a release later this year and that will be the true judge to assess how successful this stepping out move will be. This evening was a case of work-in-progress and watch this space.

The Bombadils looked every inch the duo in control and on track. Sarah’s highly schooled fiddling skills quickly gathered momentum, peaking with some exhilarating  jigs, reels and bluegrass pieces. Luke eased into guitar mode before frequently switching to mandolin to ratchet up the traditional sound. Vocal exchange and song choice complemented the playing and stories illustrating The Bombadils’ history, make up and influence grew in stature as the evening proceeded. 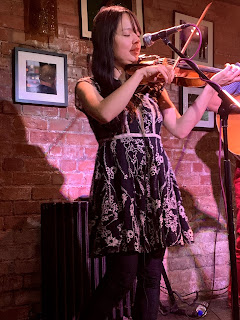 We learned many things of interest from The Bombadils shrinking size from four piece to three piece to duo, Sarah growing up in Edmonton Alberta and the fact that they covered and cut the Caroline Spence song ‘Mint Condition’ long before she named her recent album after it. There was little surprise in hailing Doc Watson as an influence (covering his song ‘Lone journey’), and two familiar songs from this side of the pond (‘Black is the colour of My True Love’s Hair’ and ‘Wild Mountain Thyme’) joined a number of original cuts on the setlist .

Of the originals, ‘Hour of Blue Snow’ and ‘Nova Scotia Goodbye’ came across as the best on the evening, both lifted off the last but one album GRASSY ROADS, WANDERING FEET. This record also included the shanty ‘Heave Away’ inducing the usual Kitchen Garden singalong. The Bombadils’ most recent album NEW SHOES also featured several times including show opener ‘The Fountain’ and the instrumental piece ‘Squirrels Rule the Day, Raccoons Rule the Night’.

By the time the curtain came down on this show, The Bombadils had succeeded in their mission of leaving a small footprint in the annals of the Kitchen Garden. They proved that self-booked tours utilising a musicians network can work and most of all, kept the flame burning on a type of music that never loses its timeless appeal in a world of technological advances. Credit to Sarah and Luke for bravely promoting their music a long way from home, but it is a process made a lot smoother when you possess such highly crafted talent.