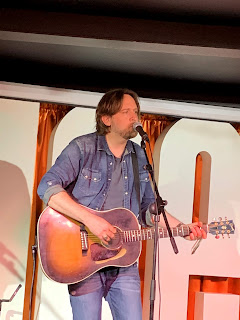 You can't defeat irony. The first post-review gig just happened to be one of my favourite artists. None other than the great modern-day Texas singer-songwriter Hayes Carll. Seeing him live pre-dates this blog by four years as it was in the dim distant past of 2008 when he first strolled onto a Birmingham stage strumming the opening chords to 'Beaumont'. There has been as many changes as similarities over the last eleven years, although this Hayes Carll classic remains on the setlist, now elevated from opener to encore slot if you view that graduation in a certain way. He still mainly plays the Glee Club when in the Midlands vicinity, with the Nottingham outlet tending to be the preference over Birmingham by design of East Midlands promoters Cosmic American. Needless to say, Hayes Carll still puts on a fabulous show, never one to disappoint with his material, and these days buoyed by his marriage to Allison Moorer (great artists obviously attract). You have probably missed this short tour by now, but I'm sure he will be back and his new album WHAT IT IS is certainly worth checking out. 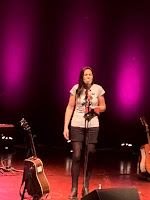 On the week the gig horse was mounted again, two other contrasting artists were seen live. The decision to take in the Thea Gilmore show at the Artix in Bromsgrove on Wednesday was a late manoeuvre, motivated by a desire to see some new artists and loving her brand new album SMALL WORLD TURNING. Before the show, admittedly she was not an artist listened to much in the past, despite being quite well known and active for a number of years. Regrets were nowhere to be seen after Thea and her three-piece band delivered a first rate performance that hooked me in throughout. Mixing beauty and grace with a slice of feisty passion ensured that sometimes it doesn't matter when you get into an artist, just get there. 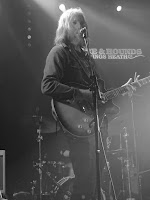 William the Conqueror completed the gig activity for the week with a show at that old familiar stomping ground, the Hare and Hounds in Kings Heath. This trio fronted by Ruarri Joseph had impressed mightily in the live arena when opening for Danny and the Champions of the World in Oxford a couple of years ago. Their album at the time PROUD DISTURBER OF THE PEACE got a favourable review on the site and this latest tour was in honour of the follow up album titled BLEEDING ON THE SOUNDTRACK. Although this gig was a little low key and perhaps lacking the memorable robustness of others attended, the band slipped into an inducing rhythmic groove and many of the appealing traits freely flowed. Maybe they will stay on the periphery of my horizon, but that zone is enhanced by their presence. 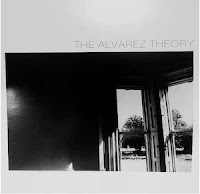 The Album Release Directory Page had only one entry for this Friday (24th) a decent new release by The Alvarez Theory. Also occupying the listening space this week has been a new record from folk duo Edgelarks, who released their latest album FEATHER on the 17th.

Another release to cross the path this week has been BRING ON THE RAIN by Chris Rawlins. This is scheduled for a formal UK launch at the end of July, but is already out in America. This band camp link is in dollars, but it's easily accessible on the UK version of streaming sites, with iTunes offering a sterling sale for those who still pay for individual downloads from Apple. First listen reveals a record worth investing a little more time in.

On the local front, Coventry-based singer-songwriter Stylusboy is active on the recording scene again with a four track EP now available ahead of more substantive material later in the year. OUT UPON THE OCEAN is accessible via the usual channels, but head to his main site to funnel your support and you may even get one of his legendary handcrafted CD covers. More info at www.stylusboy.co.uk

One final note, Brandy Clark announced a one-off gig in London to coincide with Country music Week. How times change since this blog became one of the first sources in the UK to spread the word with a stellar review of 12 STORIES back in 2013. An album that subsequently went on to claim the #1 slot on the end of year list. Halcyon times.

That's all for this week. Look out for the next post on Sunday 2nd June with hopefully some more top gigs and albums reported on.