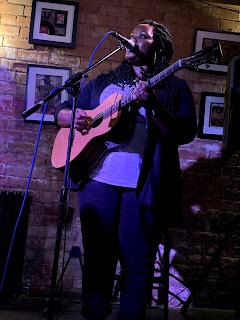 The influence of Nashville is not uncommon on the performing floor of the Kitchen Garden and this latest presentation further imported a Music City presence into the Second City. Regardless of the billing giving an edge to Kyshona, this show unwrapped as a bout of equilibrium as the renowned format of ‘in the round’ took hold. Throughout the evening Kyshona and Michael Logen took turns to share fruits from their song repertoire across two roughly equally paced sets. They stayed very much within their own confines thus reflecting a mere snippet of Nashville’s musical diversity.

For Kyshona, this was the fourth straight year of visiting Birmingham, and this venue in particular. A run begun when teaming up with Jen Bostic and Sarah Darling before branching out in a more solo direction while sharing the bill with Robert Lane and the Remedy Club respectively. Each time, this South Carolinian now Nashville resident mightily impressed with a thunderous soulful approach that drew heavily on gospel influences amidst tackling contemporary social issues in her song writing. The business as usual sign hung proudly around Kyshona’s neck as she powered through a raft of songs in tandem with her partner for the evening.

On a night of contrasts, Michael Logen played catch up with familiarity. Although a known name and an artist with a wealth of experience, this was a debut connection and thus a first chance to check in with a sample of his music. Style here is moulded from your archetypal heartland singer-songwriter finding solace in the blossoming world of Americana in 2019. Where Kyshona strongly leant into deeply felt issues for her material, Michael fished in the richly stocked pool of observation and emotion. 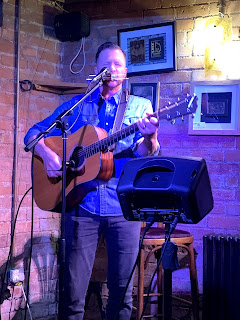 Both had the seasoned touring knack of illuminating their songs with the bright lights of clear, concise and informative introduction. Newbies to both artists would have departed a lot wiser alongside the satisfaction of experiencing two dedicated purveyors of their craft dealing a strong hand. This amounted to close on twenty songs corralling subjects such as the Susquehanna River and a coyote running loose in New York City in Michael’s case, and Kyshona honing in on the salvation side of the US prison system and sparked by social injustices afflicting her race and gender.

On the recording front, each artist shared new material, although Kyshona appeared far more advanced on this front with an album in the can impatiently waiting to be unleashed to the world. Putting contrasts in styles to one side for a moment, both came across as your hard working shop floor singer-songwriters forever vigilant for a break to reward their diligence and profound hope. Michael proudly celebrates his cuts by Kelly Clarkson and the cast of the Nashville TV series. Kyshona painstakingly seeking reassurance that the call to trade her living from the deeply embedded but secure world of music therapy to the radically unstable existence of writing songs about it was that justified unequivocal calling.

Evidence was in abundance that both artists are worthy advocates of a creative art form ripe for listener attention and appreciation. Kyshona and Michael Logen share as many inner similarities as stylistic differences. In the true words of the night’s stand out song ‘we’re all bleeding the same blood’. Check these two out either in collaboration or solo. You won’t be disappointed.