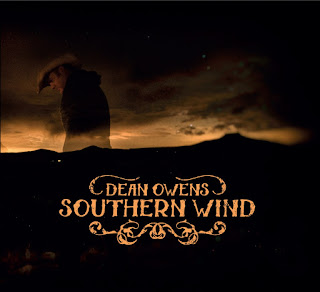 If 2017 was the year of countless excellent Nielson Hubbard produced releases, then do not count on them ceasing anytime soon. Scottish singer-songwriter Dean Owens is the latest artist to have paid a visit to this productive Nashville studio and come away with an album strong in pursuing the ideals of the originator. SOUTHERN WIND succeeds in blending the sensibilities of two nations. Distinctive song writing, often homely and personal, generally reflects the everyday surroundings of Dean, while securely placing his trust in an established posse of Nashville-based musicians is inevitably going to factor in an Americana feel. The conduit for this is the esteemed all-round performing musician Will Kimbrough, who also joins in the song-writing fray to bolster up that component.

Whichever facet you wish to explore, agreement is a certainty. There is a depth and maturity to the song writing that can only really be surmountable through a degree of experience. Songs like ‘Louisville Lip’, ‘Madeira Street’ and ‘Elvis Was My Brother’ are laced with nostalgia, deeply personal in the first two and acutely observational in the third one. The implicit nature of the lyrical content helps sow the ideas conveyed. Perhaps being on the same length as the writer assists greatly, but this does not diminish the ability to pierce the outer layers of your mind, body and soul resistance.

The duality of this album leaps out from the first two tracks. A good ole pub rocker kicks things off in ‘Last Song’; a track that Dean has tested in the pre-album release shows as one to harness the audience into some remnants of interaction. Title track ‘Southern Wind’ immediately follows and firmly ferments in your mind where this album is being recorded and the undoubted influence the surroundings are making. Think a little gothic atmospheric and the horizon will come into view.

A slightly roughened vocal presence adds weight to the sentiment of ‘When the Whisky’s Not Enough’. What more appropriate way to link Caledonia with the home of country music, Apologies for this stereotypical observation. Less re-enforced song writing exists in ‘Anything Helps’ (inspired by homelessness) and ‘Mother’, which apparently took an eternity to complete, but further cements the personal nature that forms the Dean Owens lyrical appeal.

The fact that Danny Wilson (of Champs fame) got a credit on the last song suggests the degree that Dean seems to be integrating into the wider UK contemporary roots scene recently. This may be a personal perception, but performances down south with Danny and Robert Vincent; festival appearances and a tie up with At The Helm Records all point to a greater profile than in the last couple of years at least. Obviously, for those in the know, he has been making records for many years with a strong presence in his native Scotland. Undoubtedly, this vast experience has served him well in shoring up the quality that permeates through SOUTHERN WIND making it a valuable release for fans of serious conjecture song writing.

Whether sinking into heartfelt ballads such as ‘Love Prevails’ and ‘No Way Around It’ or rocking out to higher tempo numbers like the opening segment, this album prospers immensely. A moderate temperate style tends to overall reflect the album, thus allowing the keys, strings and occasional horns to make their presence felt without dominating the literate messages, which ultimately make it a memorable listening experience.

Dean Owens makes music that is impossible not to believe in. When the dust settles SOUTHERN WIND will find its own niche in the micro world of the artist’s catalogue and the macro world of a listener succumbing to great song writing. The birth of an album may not be the right time to suggest an epitaph but ‘got the message over through the esteemed medium of song’ could quite conceivably seal this record.