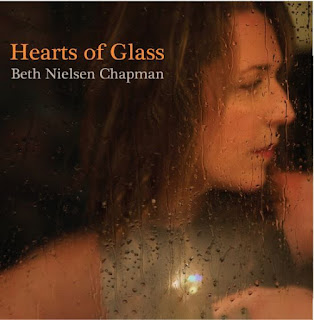 Underrated is not quite the right word to describe Beth Nielsen Chapman, but sometimes complacency can sneak in to allow her song writing skills to flicker only in the distance. If any remnants of guilt apply to this then the release of her brand new album HEARTS OF GLASS firmly presses the reset button. Song writing music has flown from Beth’s pen for well over thirty years, although often these songs have found extended fame in the catalogues of others. Her previous album UNCOVERED was a timely reminder that some of these compositions needed refreshing to get its writer’s recorded perspective. The new record is largely along similar lines comprising a mixture of new and old songs with a numerical leaning towards the latter.

Although Beth Nielsen Chapman has been tagged within the country community for much of her career, further fuelled by a Nashville base, her style is fully embraced in the smooth mature singer-songwriter category, supported staunchly by the media outlets that embrace such a sound. A sense of familiarity hits you right from the first track. ‘Come to Mine’ is one of the new songs  and, as a general exception, is a co-write featuring Kevin Montgomery and Graham Gouldman alongside Beth. This may or may not have some link to the Back to Beth’s documentary that was heavily championed by Bob Harris, and saw a multitude of fine Nashville song writing types gather in some kind of musical house party. Either way, the new track fits the mould Beth has created and would not be out of place in a distinguished radio format.

In contrast to the opener, ‘Old Church Hymns & Nursery Rhymes’ has an earthier feel and a stark reminder why Waylon Jennings cut it in his latter recording years. Familiarity with this version or not, Beth takes full control back and it bubbles along as one of the album’s leading tracks.To double up on the legendary country music icon, a song cut by Willie Nelson resides comfortably towards the end of the album. ‘If My World Didn’t Have You’ will comprehensively commit any waivers to the cause of celebrating Beth’s ability to write a pure heartfelt song.

Following in the path of the opener are three further new songs in the shape of ‘Epitaph of Love’, ‘Enough for Me’ and ‘You’re Still My Valentine’. The first is a string-heavy dark number housing the album title within its lyrics, while the second is a far jauntier offering suggesting the feel good nature that emanates from her work. The finale of this trio takes the listener into laid-back lounge jazz territory complete with percussion brushes and a scripted ‘end of the night’ feel.

The five remaining tracks have featured on old Beth Nielsen Chapman albums and wisdom decided that a rehashing would freshen them up, maybe for a new audience. Interestingly, these tend to reside in the second half of the running order, but unless you are digging deep for meanings, the general flow of the album coasts along without any momentum meanderings. ‘Life Holds On’ from the self- titled 1990 album is the pick of this bunch, closely followed by album closer ‘Dancer to the Drum’. In fact, all eleven tracks acutely epitomise what Beth Nielsen has been striving to achieve over all these years. What you get is a sample of smoothly constructed songs, regally sang and possessing an agenda-free aura.

2018 is set to be a celebratory year in a more than one way for Beth Nielsen Chapman. The UK - a kind market for her over the years - has been granted a comprehensive spring tour and a summer visit presently focussed on a Cambridge Folk Festival slot. HEARTS OF GLASS will prove a useful ally to remind folks, old and new, what she is capable of producing. A specific style has been honed the length and breadth of a successful career and timely reminders are more than welcome.

Epitaph for Love Lyric Video
Posted by David at 15:05