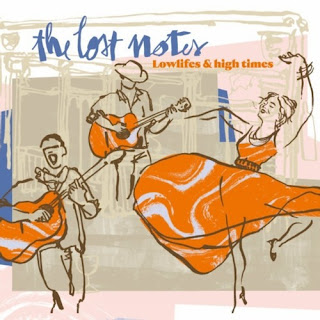 www.thelostnotes.co.uk
The first juxtaposition to impact the new album from Birmingham band The Lost Notes is its roots on the streets of the twin suburbs of Kings Heath and Moseley where all shades and facades of life rub shoulders in a cultural and socio economic melting pot. The second one is the band's optimistic and entertaining demeanour which can translate some deep profound issues into a breezy display of infectious folk inspired music laced with sumptuous pop and a cross genre approach.
First and foremost this five-piece combo, frequently stripped back to a trio for adaptable purposes on the the local music circuit, write exceedingly catchy songs that get enhanced through their multi facetted delivery. This includes frequent three-part harmony and an exchange in lead vocal between the core trio of Ben and Lucy Mills and Oli Jobes. LOWLIFES & HIGH TIMES may reap the benefits from being a late 2020 release, thus giving it a clear run at the 2021 live circuit when it eventually creaks back into life. Whatever that circuit looks like, the chances are The Lost Notes will be there in some guise spreading their brand of positivity.
The rump of the new album, a follow up to RUN FREE RIGHT NOW, consists of eleven brand new tracks, increased to thirteen on a special edition release where 'All Born Free' and 'I'll Just Hold You' get an acoustic and piano remix respectively. The full version of the former casts the first stone as the album's soul, but soon has lots of pretenders snapping at its heels.
Peaks on the album generally rotate with each listen. 'A Fool Once Told Me' is one such high catching the ear on numerous occasions with its clever lyrics decorating a piece of vintage pop meets country lullaby. When the time is ripe for a vocal refresher Lucy Mills steps in on 'Done with the Waiting' to sparkle like a gem further illuminating a sunlit landscape.
This track also houses some of the nifty guitar work prevalent on the album, first introduced in opener 'Piece of Star' and getting a little twangy in the pace-switching toe-tapping beat infused 'Holding On'. For fans of Lucy's vocals she comes to the fore later on the album when taking lead on 'Glory Days' before following straight on with the jazzy blues laid back effort 'Nobody's Fool' complete with a funky backbeat.
There are plenty of repetitive chorus parts that glue the album together, no more catchier than 'Still I Come'. Things get a little softer with the gently flowing pop-styled message number 'I'll Just Hold You'. The vocals take on a different shared approach on 'I Got Time', with the track swaying to a beat of eclecticism. 'Goodbye Yesterday' is your archetypal closer in sentiment though one of an uptempo nature as you would expect from The Lost Notes. All that's left on the special edition are the two remixed tracks mentioned earlier.
LOWLIFES & HIGH TIMES is a throughly engaging listen from a band who have honed in on their collective talents to blend a simple but effective piece of popular music with a folk 'n' roots twist. The Lost Notes are perfectly equipped to make 2021 a special year for them and those who cross their paths on the live circuit.
Posted by David at 18:44