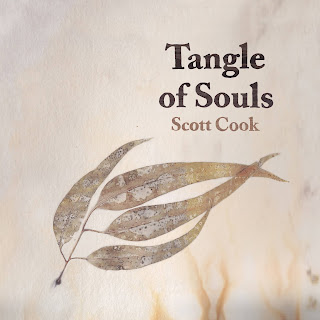 www.scottcook.net
Scott Cook makes uncomplicated music, which can be the perfect tonic when you desire a bout of well-constructed simplicity. Armed with a stripped down sound, an air of serenity and a million thoughts to convey, Cook is your typical jobbing troubadour. One likely with a restricted hinterland, but a master in converting those who cross his path into fans, at least for the moment, but in many cases for an extended duration. He is also likely to have been severely impacted by the lack of physical movement in 2020, alternatively it would be no surprise if artists of such a resilient and innovative demeanour would have several survival instincts up their sleeve At least getting TANGLE OF SOULS into the wider world keeps some element of the flame flickering and tapping into it will not leave fans of western-tinged road weary folk music disappointed.
To paint a picture of Scott Cook's musical career think branching out from his Canadian home, playing hundreds of shows across the wide expanses of the English speaking world and recording seven albums along the way. All active in a road career dating back to 2007. Like many out there, including myself, where Cook hasn't physically crossed paths, there is always the opportunity to connect from afar in this ever digitised world. Although this aspect is unlikely to compensate the experience of a real life engagement.
There is a heavy Australian presence on the album when you factor in its recording location and some of the players enlisted. The twelve tracks comprise of eleven songs, of which nine are Cook originals, and a fiddle tune that acts as the album closer. Facts aside, a decisive conclusion is a little time spent in the company of Scott Cook's music is good for the soul
Now that you have an overview of this album, click on the Bandcamp link where you can 'try before you buy' and get much more detail on the release.
Posted by David at 21:04