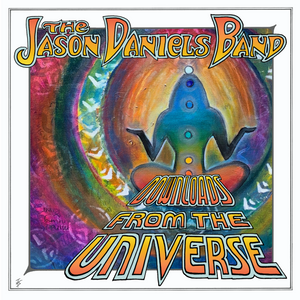 www.jasondanielsmusic.com
The cover of this album hints at some groovy content and it barely takes one track for a funky beat to hit your ears and get the feet tapping and hips swinging. Jason Daniels has gravitated from his California home to settle in the Deep South and felt the pull of a southern soulful sound to imprint an impulsive feel into his curiously titled second album DOWNLOADS FROM THE UNIVERSE. Across ten tracks and armed with a settled and loyal band of players embedded into the music enough to warrant a place in the headline act, Daniels aims high to combine rock, soul and blues into a package capable of snaring many a casual beat observer.
Horns and organ mingle with harmonica and rhythm guitar no more profoundly than the instrumental track '39202' anchored right at the midpoint of this thirty-seven minute recording. Just prior to this piece, 'I've Been a Ramblin' makes a strong play for the album's crowning point as Daniels celebrates putting roots down in Jackson, Mississippi following a period of... yes you've got it...ramblin'.
You do lose yourself in a satisfying way when delving into DOWNLOADS FROM THE UNIVERSE (still unsure of the title's origin, but hey its the vibes that count). Jason Daniels and his band make music that doesn't really warrant naval scrutiny. Just spin it and let your senses or body movements do the rest. This album possesses a sense of feel good vibrancy alongside the quality to find its way into the niche segments of many a music collection. Especially those open to a slice of therapeutic heartwarming Americana with the most infectious of soulful tinges.
Posted by David at 22:20