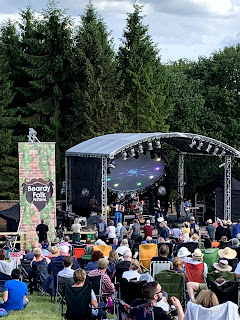 First point to make is that Beardy Folk is a three day event, starting just after lunch on the Friday and ending late into Sunday evening. For the second consecutive year, only the Saturday was attended, but if that day set the precedence then those enjoying the full experience had a wonderful time. No doubt full reviews will appear in the aftermath, although for a brief taster it is a honour to share some positive thoughts as a day visitor.

Beardy Folk (maybe reclaiming the stereotype with a large dose of irony) debuted as an early summer festival in 2018. It is set in the little village of Hopton Wafers, situated on the South Shropshire-North Worcestershire border, approximately twenty miles from the edge of the West Midlands conurbation. The ethos of the festival is to major on the UK folk scene and provide eleven hours of continuous music across two stages, with no overlaps to please the stamina-led junkies. The setting is a luscious walled garden, sloping quite prominently from the covered tent at the top of the hill (housing the bar and acoustic stage) to the suspended main stage at the foot. For the second successive year, the Saturday was blessed with fine weather; a key ingredient to a successful festival day.

Twelve acts were booked to play the Saturday with last year's headliners Skerryvore invited back to close the evening with their vibrant brand of Scottish folk pop rock. One improvement from last year was the avoidance of late night stage delays as Skerryvore got underway just on the schedule time and were able to extend their headline set to over the hour mark. There is a good time feel when this eight-piece band bound onto stage to bring an event to a crescendo. Energising a crowd is their forte and how successful they are at that, with great interaction and a sound promoting unison when in full flow.

If last summer was dominated by Skerryvore's EVO album release, twelve months on was another reminder of why 'Live Forever', 'At the End of the Line', 'Take My Hand', 'Waiting on the Sun' and 'Hold On' are ultimately great pop songs wrapped in that Scottish folk rock sheen. In line with an overall perception of a significant upsurge in attendance from last year, the front of the stage was packed for the headline performance, all animated in clapping, dancing and singing mode. Stirring stuff to close a memorable day.

Rewind almost twelve hours from Skerryvore's crowning moment and the Saturday got underway in more serene circumstances with Gilmore & Roberts up first on the main stage at midday. Exactly the same time as the barrels of Hobson's beer were untapped for the day.  The acoustic stage had its bow an hour later with Bristol based band Road Not Taken commencing proceedings. This stage went on to host a further five artists, each awarded a healthy forty-five minute slot. Unashamedly, two of the artists scheduled this year are favourites of mine and settling down to enjoy their sets was always going to be one of the day's highlights.

The music of Katie Spencer and Kirsty Merryn came to me from opposing sides of the submission spectrum (Katie direct from artist: Kirsty via PR), but both met with full approval. After giving the albums' positive reviews, they were then ironically booked to play a joint bill at the Big Comfy Bookshop in Coventry in late 2017. Since then, Katie was seen playing a short but impressive set at Cambridge Folk Festival and Kirsty made her debut in Birmingham at the Kitchen Garden. On the surface, both artists draw on differing skill sets, which meet at the satisfying alliance of marrying all qualities into fine music that resonates strongly. Their pair of sets at Beardy Folk may be have been scheduled five hours apart, but the results were hugely similar and re-enforced deserved acclaim which continues to  accrue from multiple sources.

Elsewhere on the acoustic stage, Ben Robertson impressed with guitar playing skills, while satisfying folk festival attendees who wanted a small fix of 'Beeswing', 'Fotheringay' and 'Don't Think Twice'. Calum Jones travelled down from Scotland and played an exciting confident closing acoustic set that effectively acted as a warm up for Skerryvore to follow on the main stage. This last move was one of a series of minor adjustments the festival made to enhance the audience experience.

The focal point of any festival is the main stage and prior to Skerryvore closing matters late in the evening, a further six acts graced the lead performing space. Duos tended to be the order of the day with the aforementioned Gilmore & Roberts on first, before suitably followed by O'Hooley & Tidow and Greg Russell & Ciaran Algar. All these are established acts on the UK folk circuit and set about imposing their individual styles. Katriona Gilmore frequently showed why she is a sought after fiddle player, while Belinda and Heidi proudly entertained in their own appealing forthright way buoyed by their hopefully 'more than fifteen minutes of fame' via the national focus on 'Gentleman Jack'. Greg and Ciaran are an acclaimed duo who I have never seen live before. This wrong was duly corrected and they were the artist leaping up the most on the appreciation scale.

The remaining three main stage acts diversified the line up in terms of format. The Trails of Cato are a Welsh-English trio, who conjure up a very rootsy sound in their three-piece set up. They were also the only act to play two sets as they returned to fill in a slot on the acoustic stage later in the day. Chris Helme was the solitary solo performer on the main stage as this singer-songwriter, who saw fame in the 90s as frontman for the band Seahorses, played the penultimate outdoor set just as the sun began to fade on what had been a perfect festival day weather-wise. This set was a little low key as it followed one of the days more popular presentations when Gary Stewart and a full band set up delivered a comprehensive tribute to Paul Simon's classic GRACELAND. The front of the stage was flooded at this point with many folks reminiscing like it was 1984 via dancing and singing songs word perfect. Where you reside regarding tribute acts at festivals could be put to one side for an hour as this timely reminder to what a special album GRACELAND is graced the rural surroundings of Beardy Folk.

Strong evidence rang around the site at Hopton Wafers that Beardy Folk is on a upward trajectory to becoming an established festival on the circuit. The more populous feel in 2019 still left plenty of relaxed breathing space. Hopefully the all important numbers are in the right column for the organisers. They have certainly got the scheduling and organisation right. Here's to 2020 and maybe the Saturday extended to the whole weekend in these quarters.