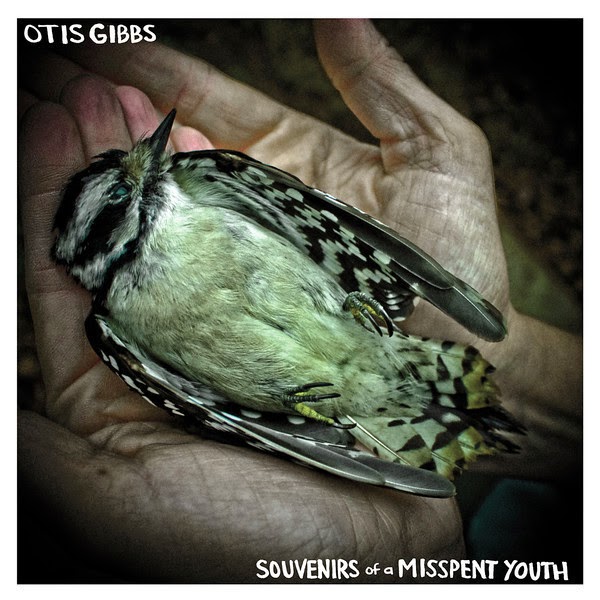 Thanks for giving a damn is the signature sign off phrase Otis Gibbs uses in an appreciation to people engaging with his music. It is partly this honesty and humility which has made Otis a hit on the UK/Europe folk Americana circuit over the last few years along with his capacity to skilfully master the art of storytelling through song. SOUVENIRS OF A MISSPENT YOUTH is the fifth release since Otis made a bid to take his music overseas and like so many of its predecessors is packed full of insightful and compelling songs.

Once seen Otis is rarely forgotten, whether it’s his trademark beard, gruff vocals or sheer ability to captivate a room full of demanding ears. He can range from both cynical about the industry to appreciative about his fans but always ready to share his perceptive skills via his lyrical competence and the standard folk style medium of acoustic guitar. On record, and especially this latest release, there is more scope for development and there is a fair amount of country appeal on the new album with the increasing utilisation of fiddle and pedal steel guitar. All this adds spice to the core ingredient of Otis which is the construction of a song that will absorb into your head, heart and soul.

While resorting to the ever popular crowd funding model to finance the record, Otis found that there were many faithful believers out there. There may have been a wait for this release, Otis previewed a number of songs on his tour last year, but this 10-song 38-minute collection is ready to be unleashed on a UK audience through another upcoming tour and a wider availability through physical and digital formats. A tie up with Thirty Tigers music management will enhance its promotion as even a record of this quality needs a nudge in the right direction.

The record’s title is lifted from a quote Otis noted down when his father referred to the ailments of an arduous and torturous working life. This talent for spotting the artistic potential from everyday events has been the source of Otis’s craft since the days when he too had to toil for a living. ‘No Rust on My Spade’ is one of the record’s standout tracks and re-tells the exploits from his tree planting days. The personal stories roll on especially in ‘Ghosts of our Fathers’ where a neighbour’s loss in Vietnam is the subject. While opening track ‘Cozmina’ has its origins in picking up a hitch hiker in Romania.

This opening number is an interesting development in Otis’s work as it begins with a minute and half fiddle solo with a significant pause before the vocals kick in. Along with the usual guitar accompaniment there appears to be a wider use of pedal steel especially in the tracks towards the end such as ‘Kokomo Bar’ and ‘With a Gun in My Hand’. The traditional tones of banjo can be detected in ‘Nancy Barnett’ while one of the more upbeat numbers ‘It was a Train’ rumbles along in the vein of its subject.

To take a break from extolling the virtues of Otis’s song writing, the excellent ‘Wrong Side of Gallatin’ comes from the pen of his long term partner Amy Lashley but possibly the record’s premier track is ‘The Darker Side of Me’. This riveting number has a Merle Haggard feel to it and it had to be checked it wasn’t a long lost cover. Sources confirmed the origin to be a camp fire story which inspired Otis to commit to song and once again confirming that listening and interpretive skills are core to great folk song writers.

Otis Gibbs is an independent free spirit and a gracious sharer of his art while SOUVENIRS OF A MISSPENT YOUTH is the fine recollection of a cultivated troubadour. This record will have crossover appeal whether your specialism is country, folk, roots or Americana and like all his recordings is best consumed alongside a live show. Support both, and Otis Gibbs will thank you for giving a damn.

Email ThisBlogThis!Share to TwitterShare to FacebookShare to Pinterest
Labels: Americana, Folk, US