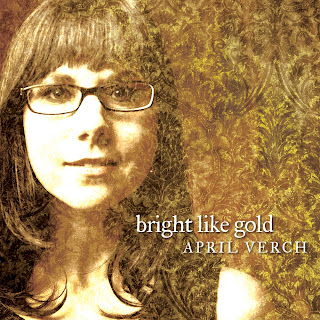 Each year the Transatlantic Sessions project arranged by Jerry Douglas and Aly Blain assembles a world class collection of roots artists from either side of the pond and surely it can’t be too long until they unveil the talents of April Verch to a wider UK audience. Regular sessions’ invitee Bruce Molsky has had a long association with April and makes several key contributions to her new album BRIGHT LIKE GOLD due for release in the UK on September 23rd.

This multi-talented singer-songwriter, fiddle player and step dancer from Canada’s Ottawa Valley is a veteran of many recordings though definitely not in years and the latest record is a balanced exemplar of old time influenced yet progressive fiddle and bluegrass tunes. From her very early formative years, April has been exposed to a style of music which remains true to its core even when it flickers in and out of the wider musical trends of the day. The endearing quality of BRIGHT LIKE GOLD is that in its diversity the album succeeds in reaching beyond the technically initiated and will resonate with those who see the fiddle as an essential ingredient of any musical ensemble.

A deep breath will be required before diving into this twenty song hour long album but the roughly 50-50 split of instrumentals and vocal tunes is distributed accordingly to keep your ears alert throughout the listening experience which far from drags. Just to allow you to take a break from the extensive educational experience, April does justice to the Loretta Lynn standard ‘Don’t Come Home a Drinkin’’, a song from a music genre which she wholeheartedly endorses.

Her regular sidekicks which double up as both recording and touring partners, Cody Walters and Hayes Griffin, are also key architects of BRIGHT LIKE GOLD. The latter’s western swing composition ‘Foolish Heart ‘ is one of the record’s highlights and generally their banjo, bass and guitar work blend intrinsically with April’s virtuoso fiddle playing. As well as the contribution of Bruce Molsky which includes a fabulous fiddle duel on ‘Evening Star Waltz’, April has managed to secure the services of legendary American bluegrass maestro Mac Wiseman to duet on her self-penned ‘The Only One’ and provide a majestic vocal performance on ‘My Home in the Sky’. 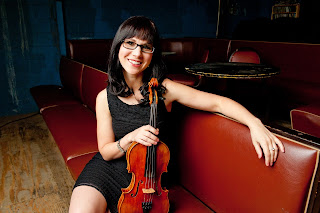 Though a proud citizen of Canada, April ventured south to Boston’s esteemed Berklee College of Music to formalise her education and exploring the talents of this young lady will enhance yours. It is definitely worth accessing the extensive online bio especially to grasp a further understanding of the differences between Canadian and Appalachian fiddle playing. The vocal style of April is far from classical and differs a little from the pristine tones of Alison Krauss but it dovetails the multitude of acoustic sounds perfectly and exerts extra emotion to her self-penned songs such as ‘Broken’ and ‘Sorry’.

Accolades, awards and appreciation have flooded April’s way in her homeland and if not put off by the extensive content BRIGHT LIKE GOLD could help expand her UK awareness outside a niche market. Therefore this is almost a plea to experiment with the album and challenge your mind and attitude to buy into the work of April Verch and her band of collaborators. The October tour to some of our more low key venues is another opportunity to connect and either way, disappointment will not be on the agenda.