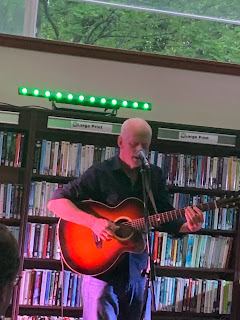 Positive vibes were beaming around the art decor surroundings as a creative slice of duality spiced the latest presentation of roots music from the good folks of Thimblemill Library. Contrasts were abound from a seasoned Wisconsin performer flitting between folk, blues and observational songwriting and a fledgling Bristol-based duo possessing all the hallmark of a pioneering far flung retro Americana act. Dig a little deeper, and synergy could also be mined as Willy Porter and Fritillaries were thrown together to curate a duly admirable evening of music to breathe life into any weekend malaise.

Technically, this was not a twin bill with the duo of Hannah and Gabriel accepting the invite to play a thirty-minute opening set for a touring artist of a more established nature. Porter will be the first one to embrace the next generation and humility was forthcoming as he propelled a couple of sets into a Smethwick evening leaving the spoilt clientele absorbed by an entertaining performance.

Split by many years, the acts were bound by a new album in the working. For Willy Porter it is yet another release joining a lengthy back catalogue that at least goes back to 1990. Info gleaned by including a track from that album in the set list. Fritillaries are at that exciting stage of unleashing a debut record to the world and July 15th is a date etched in their minds.

There is never any harm filtering in associated resemblances into any post-gig reflection. There is so much Dave Rawlings emanating in the guitar style of Gabriel. The quip of not wasting a single note was stolen from an audience member on the evening and is now embedded as an apt written description. This is Dave Rawlings in his supportive phase with Hannah playing the Gillian Welch role of commandeering the vocals. Hannah was a touch more ethereal in style than the iconic associate, but her voice still contained a magical essence that makes the music an attractive draw on first listen. 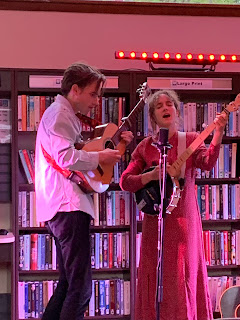 Willy Porter's bio inferred a healthy dose of the blues which frequently came across in his guitar playing. Vocally there was an element of Paul Simon, mainly in the pace of delivery and the way the words were spun. Engagement with an audience was his ultimate pulling  point. A trump card of a fun packed improvised finale drew the anticipated applause. Cynics searching for the template had to stretch their tentacles as it was a pretty impressive twist of random suggestions.

Both artists were vaguely known beforehand without primary experience. Fritillaries began life as Rainy Day Women whose gigging ventures had taken them north into the Midlands on several occasions. The name change (explained by Hannah) coupled with the upcoming self-titled debut album release on Pear O' Legs Records represent a real springboard for them to become one of the UK's premier folk-Americana duos. Mandolin, banjo, multiple guitars, songs and style are all in place. All that is needed now is a little bit of good fortune.

Willy Porter was the master of the informed nuggets. The backdrop of books led him to muse that each writer once stared at a blank page and on the US gun impasse he acknowledged the deep entrenched ideology of both sides. Although on the latter, inference on right and wrong was deemed. His love of trains and baseball radio commentary shone in observational content, but he was always ready to embrace the world of his current surroundings. Ultimately, he was a very astute performer.

The value of any gig is enhanced by the post-show glow. The experience of the present is often a gimme in live music, so extending it into the realms of the memory bank is a credit to each performer. Willy Porter can travel back to Milwaukee content that new audiences are still out there after many years of performing. Fritillaries have the anticipation of a whole new world waiting for them when they get their music out.