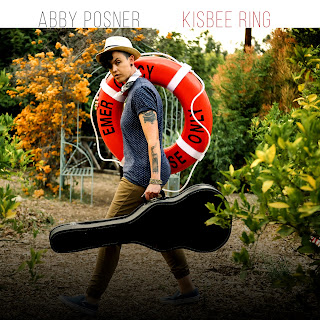 A little research into the background of Abby Posner reveals a fully diversified musician dipping into every facet of their skillset to pop up in a multitude of arenas from scoring film music to treading the boards as a touring musician flitting between bands and solo. It appears the music does get ahead of the name, which while not being a bad thing if your heart is in your craft may inhibit full exploration of what can be offered. The release of a brand new solo album with an international horizon could correct that and KISBEE RING is set to give the career of this LA based artist a boost.

From a perspective of writing, producing, arranging, mixing and playing, this ten track effort is just a trio of slight contributions short of being the ultimate one person affair. The result is a transparent piece of work that allows the considerable talent of Abby Posner to flourish and shine. Any listener tuning in with a particular ear for music fluctuating between indie folk and light pop will immediate click in. If making your music accessible for a desirable market who cherishes acutely crafted material is an artist's aim, this album with the slightly unusual title evidences game, set and match.

Debate can rage around the optimum length of an album, but there is nothing wrong with a neat round ten track 33 minutes. Pop music thrives on the three-minute track, and while this is more of an acoustically driven folk-style album, there is an ease to which it transmits from artist voice to listener space. The album title doubles up as the first track and transpires to be another name for Life Preserver. Enhanced knowledge each day keeps the mind fresh.

Meandering out from 'Kisbee Ring', the other nine tracks take you on a deep and meaningful journey theme-wise, highly personal to Posner, but delectably played and beautifully sung. One warning is that this record does need a little space to prosper or headroom away from the hustle and bustle. There isn't a go to track that will enhance a sampled playlist. This is probably not an artist's intention when they set on the path of a commercial release, but there is at least the consolation of parading a record that hits a chord in its entirety and invites a listener to engage for a time friendly period.

Another notable feature is the admirable blend of vocal presence and subtly delivered sound. The former is generally to the forefront and leaves symbolic moments for the latter to simmer. There is no hesitation in hitting the repeat button and before you know it a couple of blissful hours have been sunk into the musical world of Abby Posner. KISBEE RING shines a light on where her career is at the end of 2021. The early year of a new decade that may lead into new spheres for this obviously well equipped all round musician.