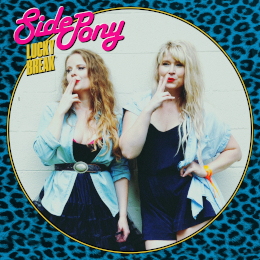 Side Pony is a brand new recording and performing duo comprising of Alice Wallace and Caitlin Cannon. LUCKY BREAK is the title of their debut album and no such good fortune is required for it to make waves in spheres besotted by an edgy and sassy style of country music. Across a brief template of eight songs falling just a minute short of the half hour mark, every inch of space is used to highlight the deep seam of classy collaboration and how to make a record brimming with fun mingling alongside bouts of more serious content.

Alice Wallace is the better known here of the two dating back to an album released and reviewed in the early months of 2016. This was followed up with a subsequent release and accompanying tour, a status that is likely to be replicated in the spring of next year. Obviously this will be in tandem with her new accomplice and a lesson in how to blend a pair of fabulous vocalists in music awash with a sound driven by a country wheel yet forever reaching out to eclectic minds.

The solo work of Caitlin Cannon is a little behind the curve of Wallace, but one suspects that anything Side Pony release will be a catalyst providing impetus for two solo career to thrive. For the meantime the focus is firmly on the duo front and this sparkling collection is set to dazzle when tempting those eager to bite.

The fact that this is of East Nashville origin rather across the river is emblematic of an independent streak that permeates the album. All songs are co-written originals, and a top team of players join forces to create a soundtrack adorned by a vast array of instruments including the obligatory pedal steel. Yet no one sound dominates the proceedings.

The bright and breezy rocker 'Bad Ideas' kicks things off and doubles up as one of the promoted tracks ahead of its early October release. Title track 'Lucky Break' was first out the traps in the single haul and takes second place in the running order while proving one of the more thought provoking tracks on the album with a theme of chance resonating strongly in the music industry. The retro and extravagant sound to 'Heels' illuminates the album with a huge slice of cutting irony and an anthem-like appeal. A sort of '9 to 5' vibe in 2021.

'All I Have is Want' heralds the introduction of steel to fuel a country hunger and brings things into slowish ballad mode. At this point Wallace and Cannon have nailed the art of diversity without losing control of their shared cohesive input. 'Old Woman' tips the album into its second short half and more of the mellow sound prevails. Once again you could place this track in any country-focussed release from a wide span of sixty plus years proving that good music is timeless.

As we head into the final trio of tracks, 'Under the Surface' moves the tone in a slightly different direction. Yet the writing remains strong, relevant and deeply poignant. 'Pressing My Luck' is a blueprint for the classic duet and falls into the realm of waltz territory. Definitely one for the late night moments when the pace starts to lessen a touch and bodies start to sway. All good albums leave you wanting more and 'All the Time in the World' solidly places this record in that category with once again plenty of sass liberally deposited and more than a little Reba injected into the early stages of a piano-led soundtrack that climaxes with a little stand off humour.

LUCKY BREAK is one of those treasured releases that will refuse to leave the room and never tire of being heard. Alice Wallace and Caitlin Cannon excel as independents, collaborates and an immersive paring. Their Side Pony creation has emerged as a little gem and created a journey that you know will be fun, entertaining and right on the mark for those tuned into their inner country persuasion.