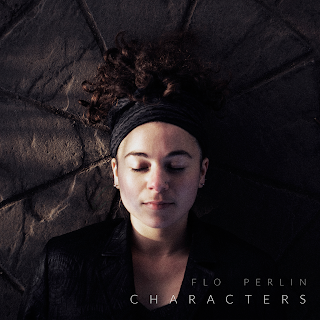 CHARACTERS is the debut release from London-based artist Flo Perlin. Its eight tracks evolve as a hypnotic and mesmerising experience keeping the listener entranced for an intoxicating half an hour. The addictive qualities shine through as a deeply personal folk overcoat is underpinned by emerging jazzy undertones. Themes range from exploring her own diverse heritage in 'Baghdad' to something even more personal than the general feel to the album in 'Hold Up Your Head Child'. This last track employs the writing technique of repetition that plays a significant part in embedding the album into your psyche via the reams of repeat plays that are a compelling outcome of hooking in.

The gently strummed 'Slowly Unfold' kicks things off in a lo fi kind of way with subtle strings hazily serenading you. This is followed by the record's first single 'Back in Time', which like it says in the title brings nostalgia right into focus. The two tracks mentioned earlier form a twin cannon to take you to the half way mark and probably hover around a peak of the album's appeal in their presence.

There is a heavy sensual feel to the album's second half. The art of communication influences 'Words', while the scent of 'Pine' prods the aromatic side to your imagination. 'Blue is the Colour' is as visual as you want it to be and the motion attached to 'Move Through the Waves' gently guides you to the conclusion. A point where you feel the transition from a folky outlook to a jazzy cloud is complete.