It was of little surprise when My Darling Clementine announced they were swapping the northern climes of Manchester for the southern suburbs of Birmingham once gigs in some format were given the green light. As has been recently the case, if the artist can re-adapt, the Kitchen Garden can do likewise to at least bring some remnant of normality to both performer and audience. So it was old friends reunited for Lou Dalgleish and Michael Weston King with a visit to their old West Midlands stomping ground and a venue that has been kind to them in the past. 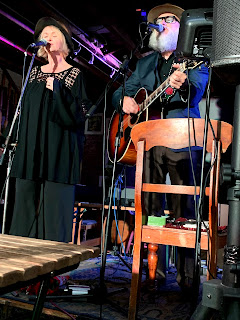 With the new gig landscape taking shape and My Darling Clementine being the subject on these pages many times over the last decade, focus turned onto nine things to take away from a gig that both bathed in the odd and the norm:

On the journey to the venue it was decided to dedicate this gig to the late Biddulph-based promoter Craig Pickering who held My Darling Clementine and Michael Weston King in such a high esteem. He even had a credited hand in influencing The Other Half project which the band undertook with Mark Billingham. Craig lost his battle with illness during the lockdown and despite only attending a couple of his Biddulph shows, we crossed paths at many festivals and gigs over the years ranging from the folk gatherings at Shrewsbury, Moseley and Cambridge to a ritualistic annual meeting at Maverick. Michael wrote the most beautiful eulogy on Instagram and I know would be the first to fondly remember Craig as he tentatively mounts the gig carousel again.

The song 'Ashes, Flowers and Dust' took on a new dimension tonight and was among the strongest felt in a long time. When heard live before you always felt it with Lou and Michael, however this time its pounding presence belonged with every single body in the crowd. The poignancy was emblematic as it rattled even the most hardened of bearing souls.

Have you ever thought at what point you stop greeting newly met colleagues in January with the ritual seasonal greeting? Likewise at what point will the pandemic cease to be the greeting bond between artist and audience. The answer is unknown and maybe a little soon to ponder as both parties get back on that proverbial carousel. This evening was my sixth gig and ninth music day since May 17th. My Darling Clementine had played a show the evening before. Yet for many, each gig is a first experience, so I suspect it will be a while before this greeting fizzles into the ether.

Lockdown has been a different experience for different artists. My Darling Clementine had a focus on releasing the fruits of their Country Darkness project where an album full of re-interpreted Elvis Costello songs were given the duet treatment in tandem with legendary musician Steve Nieve. A handful of these were shared in the second set where 'I Lost You' and 'I Felt the Chill Before the Winter Came' joined the previously heard 'Indoor Fireworks' as exhibits from a very fine album.

A quick check on the dates and the debut My Darling Clementine album was released in 2011, so we are now in the year of a milestone anniversary. Admittedly it was about a year later when I first acquainted myself with that release, but it has been no turning back since with countless shows and appearances plus not being late to the subsequent releases. Songs from HOW DO YOU PLEAD? still sound as fresh as they did on first listen and '100,000 Words', 'Going Back to Memphis', 'Departure Lounge' and 'Goodbye Week' proudly flew the flag for the debut across the pair of sets this evening.

Maybe the re-configured performing space spanning out over the covered patio played a part or the pyrotechnic-styled heaters, or even the raised stage which has appeared since the duo last played the venue. Understandably artists are initially going to have to find their feet having been denied this platform of their craft for a considerable period. Most, including Lou and Michael, are quite open about this challenging situation and asking for the audience to bear with them. It may feel odd for the artists playing live, but any apprehension evaporates once the music hits the ears of the grateful listener.

The polished satire of My Darling Clementine hasn't taken a dip in lockdown, nor the shine of their stunning songs such as the viperishly cutting  'No Matter What Tammy Said', the slick 'The Embers and the Flame' and the deeply personal 'Eugene'. Lou and Michael are experienced enough to know what works and rightly tend not to tinker with a successful formula. Familiarity does form a major part of a My Darling Clementine show and that is one victim not to succumb to Covid-19.

Our Race is Run

The previous My Darling Clementine show at the Kitchen Garden is December 2019 was also hailed as the final review of this blog. It was too tempting not to use the 'race is run' analogy as the song of this title made the setlist. Eighteen months on and a lot of water under the bridge (give or take the blog's six month hiatus), the song still makes the list, yet this time was dedicated to the hapless (or hopeless) Matt Hancock as this blog survived the blip and is alive and kicking.

The missing piece from tonight's gig was 'what next for My Darling Clementine?' Perhaps post-pandemic we should all learn to live more in the present and not be so impatient. However for a duo who wrote so many super songs between 2011 and 2017, it is hoped that the well isn't dry. Patience will apply for now and a short wait will be worthwhile if the creativity returns.

The re-emerging gig world over the last six weeks has featured both the old and the new with My Darling Clementine firmly in the former camp alongside Kathryn and Sean, Emily Barker and Danny Wilson. It is fitting that these artists are swiftly out of the blocks as they gel so well with their fanbase. It has been an exhilarating and emotive return to live music with My Darling Clementine playing their part in a wonderfully curated Kitchen Garden renewal.