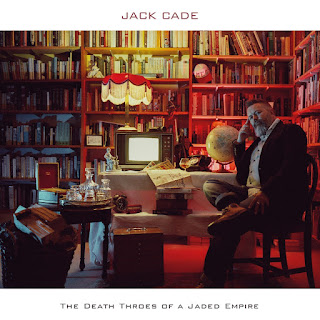 The music of Jack Cade emerges from an atmospheric mist of dry ice to create an instant impact upon the ears of a curious crowd. This crowd may or may not be unsuspecting, but some spadework is likely to be the order of the day to dig deep into the rich seam of an artist as distinctive as you are likely to come across on the roots circuit. Don't expect an easy ride if you fancy taking pot luck with a new artist, and this album is certainly not for the faint hearted. From the implied message in its title, THE DEATH THROES OF A JADED EMPIRE is a vehicle to lament on how things aren't really what they should be and maybe a spot of songwriting therapy can free the soul. Make no mistake this will be filed among the darker elements in your music collection, yet that corner can be awash with riches.

Beneath the power hammer vibes of Cade's pounding vocals lie a bunch of irresistible songs headed by the mesmerising 'The Amber Lights', a song rapidly becoming a dominant soundtrack to the opening month of 2021. Here Cade graphically documents the decline of an English seaside town, a symbolism close to the heart of this south coast raised Englishman. There is a streak of Johnny Cash in alt country/folk mode here especially if you excavate a little deeper. Thoughts turned to the Handsome Family as an associate sound, but having played some of the songs the realisation dawned that Cade flourishes in a deeper seam.

If any further heads up is required as to which empire is considered jaded and in its death throes, tune into 'The Awakening', a track singled out for promotion ahead of this album release. "History is written by the winners, no matter if they are the sinners" goes a long way to sharing a candid sentiment in the opening salvo. Questions are asked and listen out to see whether answers are forthcoming.

The first two songs mentioned here form part of a high impact opening trio led off by the infectious scene setter 'It Ain't Easy'. The remainder of the album bubbles along in the chosen key until erupting with the rousing anthem, and painfully truthful 'What do the People Say'. There is a dawn feel to this song especially following two of the album's darker moments in 'Night Terrors' and 'Some Bruises Don't Fade'. The dawn analogy extends into the album closer when 'Deep Blue Sea' shares a breath of optimism that the death of a jaded empire may not be such as bad thing.

The soundtrack accompanying Cade's cavernous vocals and deeply perceptive songs is perfectly framed, and you can see why his work has wandered into cinematic territories such is its evocative presence. It wouldn't take too many guesses to  discover that a horror edge appears in the destination of his music.

THE DEATH THROES OF A JADED EMPIRE follows in the wake of Jack Cade's two most recent albums from 2016 and 2019 respectively, and it definitely takes a turn down a darker avenue especially than its most immediate predecessor BEAR BONES. Maybe this album is just the tonic required for the weird times we live, and fans of roots music fully understand that an edge of melancholy fuels a positive outlook. Take your time with this one, tweak the antenna, find Jack Cade's wavelength and a treasure trove will also emerge from that proverbial mist.