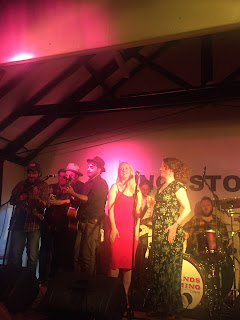 The eighth staging of the world’s greatest micro music festival was greeted by a house full sign as the ‘legendary’ Tingewick village hall swung into action for its annual renewal. Putting hyperbole to one side for a moment, Tingestock does have an exceedingly good knack of fine-tuning its optimum appeal to a dedicated audience. Five excellent acts under the curating guidance of Clubhouse Records spanned an identical number of hours to ensure a sleepy North Buckinghamshire village kept one eye open to a triumvirate of rock sounds, positioned in the realms of alt-country, folk and wide-encompassing Americana. Cross colonial collaboration, comradeship and putting music into perspective were the themes emanating from this year’s staging. Within a tight remit, balanced offerings were prevalent on the vocal, tempo and instrumental front, with the sole exception being of original material almost entirely ruling the roost.

From memory, on only three occasions were the works of the greats celebrated including a fitting finale consisting of an artist-packed stage negotiating with a minimum of fuss on who was to sing which verse of ‘The Weight’. Impromptu proved a wonderful thing even if Luke Tuchscherer inevitably gravitated towards the iconic singing drummer role and Don Gallardo stole a march to lead the chorus. Indeed Luke went head to head with multi-talented musician Thomas Collison for the most productive performer on the evening, with both featuring heavily in three of the five sets. 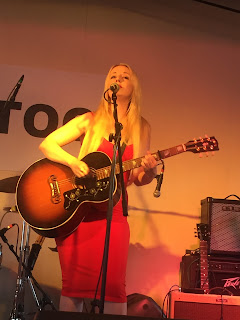 Their frenzied evening of activity began in a semi-relaxed state as opening act Hannah Rose Platt replicated her Maverick Festival set list from the previous week with the gradual unveiling of a full band. The solo-delivered trio of ‘Dancer’, ‘Brooklyn’ and ‘1954’ got Hannah into her storytelling groove especially the latter which has blossomed to be the signature track from her excellent debut album PORTRAITS. Thomas joined Hannah initially on keyboards before adding some delectable lap steel, a welcome addition to the restriction of the Maverick set. Eventually Luke on drums and Tristan Tipping on bass completed the line-up as Hannah raised the beat a notch for two new songs set to feature prominently on her follow up album due out later this year. The recently released single ‘Chanel and Cigarettes’ closed the set, but it was the preceding song ‘When the Hurricane Came to Town’ which just gets the edge on early listens to the new material. While from the evidence of the first album, her vocal approach and attention to storytelling detail has firmly placed Hannah on the folk edge of any genre claim, indications are beginning to point to veering more in a straightforward Americana direction. Thomas has produced the album and a quick delve into his background through work with The Dreaming Spires, Luke Tuchscherer and Don Gallardo gives further credence to where the sound will reside. Anyhow, Hannah remains a bright emerging talent on the UK’s music scene and wholeheartedly bought into the spirit of Tingestock to become a one of their deserved alumni. 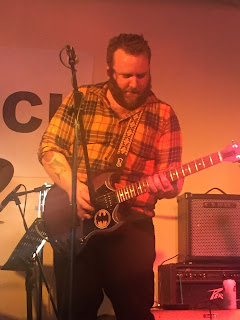 Luke Tuchscherer followed Hannah’s set fresh on the back of the release of his outstanding brand new album ALWAYS BE TRUE. This time the front role beckoned for Luke (the former/forever Whybirds singing drummer) as his five piece band set out to serenade, impress and ultimately rock out. Thomas was in action again ramping up the keys element for this set often in soulful proportions. Right from the off, Luke needed minimal time to settle with ‘Waiting for My Day to Come’ sounding superb. The set raced along with material from the new album featuring ‘Amanda Jayne’, ‘When the Dream Dies’ and ‘Don’t Put Me Out’. ‘Easy to Fall’ and ‘Just Like Holden’ from an earlier EP also provided a platform for Luke, Thomas and the other guitarists to strut their stuff, plus an admirable debut performance from the drummer, quite literally new to all the songs. A little bit of indulgence seeped into Luke’s set with a closing version of Neil Young’s ‘Down by the River’, but by then his own acoustic guitar had been ditched for the electric and the whole band was not going to let their momentum go to waste. 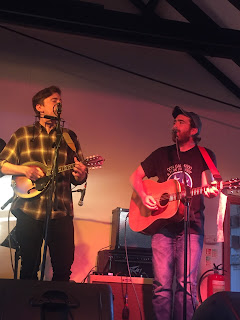 Along with Luke, Oxford-based duo Loud Mountains, originally from South Carolina, have also put out a record on the Clubhouse label, although this was a debut EP in 2016. Led by brothers Kevin and Sean Duggan, the duo expanded into a temporary trio for their Tingestock set with the addition of a pedal steel player. The logistical positioning of the third musician a whole stage width away from the harmonising brothers impacted a little on fully utilising the steel, but there was still periodic good use of the twang. Having seen the duo open for a couple of artists in Oxford gigs put on by Tingestock guardians Empty Room Promotions, this overall performance was viewed as a significant step forward. A jam the previous evening with fellow Americans Don Gallardo and Travis Stock led to them sharing a version of Guy Clark’s ‘Stuff that Works’; a fitting rendition of a song that carries forward the notion that the works of this legendary songwriter will last forever. While the pedal steel flickered in and out of their own songs, mandolin, harmonica and the harmonies fully sealed the appeal with perhaps the key moments being the songs ‘Lethal Remedy’ and ‘She’s a Fire’, with the latter being graced by Hannah Rose Platt on guest backing vocals. 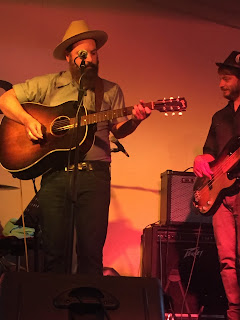 After the roots rock of Luke Tuchscherer and the harmonious folk of Loud Mountains, who better than Don Gallardo to supremely blend both styles to give an effortless display of high class Americana. Don was the sole overseas touring artist on the Tingestock line-up, with perhaps the added pressure to justify his presence to those with an investment in him. Needless to say, he was in stylish imperious form. Band prowess, powerful vocal clarity and the innate ability to pen incredibly catchy tunes have all been contributing factors to Don Gallardo further establishing himself on the UK touring circuit over the last couple of years. In fact, this was his second Tingestock appearance, after impressing immensely in 2015 with a performance then backed by his Clubhouse colleagues The Rosellys. This time Don and his travelling partner Travis Stock enlisted – you’ve guessed it -Thomas Collison on keys and Luke Tuchscherer on drums for his band, and the quartet were bang on the mark right from the first song to a barnstorming finale of ‘Banks of the Mississippi’. It was fascinating watching the impact and presence of Travis on bass, effectively driving the sound in terms of tempo, beat and leadership. While his onstage relationship with Don must be telepathic, he seemingly played an enormous role in pulling together the makeshift line-up to provide a thrilling set to the sold out crowd.

While ‘Midnight Sounds’, ‘Carousel’ and ‘North Dakota Blues’ easily jostled with the aforementioned concluding song for the set highlight, probably the most ear catching aspect was the strength of the new material which was particularly highlighted by the tune ‘Kicking Up the Pavement’. The name of his co-writer for this piece escapes me but the recognition of him penning cuts for the latest Miranda Lambert album raised the ear lobe. The exciting prospect of a new album from Don Gallardo, assumingly to be released on the Clubhouse label, has proved to be an enticing moment as the summer music extravaganza kicked into action. 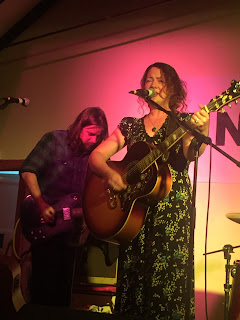 You could say Don Gallardo was the star of Tingestock 2017 – few would dispute, but stalwart UK alt-country rockers The Redlands Palomino Company were afforded the headline spot and ensured the evening soared towards it inevitable crowd pleasing conclusion. Appearing in their usual five-piece unit, this was classic Redlands. Full of impish wit, there was plenty of ironic interaction between husband and wife team Alex and Hannah Elton-Wall, with the usual exchange of vocals and plenty of highly charged tunes. While this band has been on my horizon for close on a decade, Hannah indicated that they have been together for eighteen years. The answer to their longevity may be down to not exerting too much energy on album releases, but more seriously, they seem to be at perfect ease with what they are trying to do. On their day, you are pushed to find a better band in this country playing a pumped up brand of pedal steel driven alt-country rock. Evidence of this continually surfaced during a headline set which burst into action from the opening bars of ‘Broken Carelessly’ right through to Alex proclaiming his respect for those in public service in the usual peerless closing anthem ‘Doin’ it for the Country’. All the old Redlands favourites were on show, with pedal steel player David Rothon switching to conventional guitar to add some Byrds-style twang to classics like ‘Wasted on You’, ‘Coastline’ and ‘Take Me Home’. The added good news from this set was Hannah revealing that a sixth Redlands record should be on the way. If the evidence of the last album is a guide, the lengthy wait will be well worth it. However active or not this band are, it is always good to catch up with them live and they provided a fitting end to an evening which buzzed from act to act.

Tingestock 2018! Folks will be demanding it. The 2017 exhibition once again provided a faultless showcase of grass roots music rising to a level way above its base. Full credit to those involved in the whole set up and ensuring that splendid soul defining music can flourish within the budget of common sense. Now, as a footnote, the terms ‘greatest micro festival in the world’ and the ‘legendary Tingewick village hall’ may not be so exaggerated as first indicated.