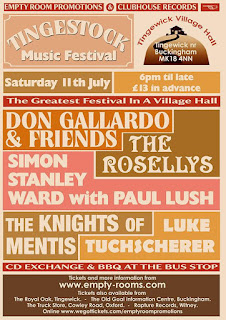 Some festivals have bigger budgets. Some festivals have artists who have sold more records. Some festivals embrace the corporate agenda to a higher degree. However few festivals meet their objectives so acutely as Tingestock and even fewer can boast their home as a village hall. So the playing fields may reside in differing stratospheres for such comparisons, but if the absence of pretension is a desired experience then Tingewick Village Hall on the second Saturday in July was the place to be. For nearly five hours, and for a modest outlay, five artists driven by a goal of perfecting the interpretation of American roots music decorated the blank canvas of open minded attendees with the magnetic appeal of powerful song and exhilarating tunes.


One of the five has the distinct advantage of being a Nashville resident and is fast emerging to be among the discoveries of 2015. Don Gallardo would surely smile at such a suggestion, but in the midst of a hugely successful mid-summer visit, the unveiling of a majestic new album and unlimited praise, he is proving to be the talk of the town within discerning listening circles. Don headlined on his first appearance at Tingestock and displayed a brand of true country music rarely seen in the modern environment fixated with the obsession of courting watered down popular appeal. Ably assisted by his travelling sidekick Travis Stock on bass, Don was supported by the UK version of his How Far West backing band namely the bulk of The Rosellys. Spiritual Hammond organ, evocative pedal steel and intermittent flashes of lauded electric guitar, wrapped a series of exceptional songs, mainly from the current release HICKORY, but also extending into Don’s back catalogue.

While the songs from the new record such as ‘Banks of the Mississippi’, ‘Carousel’, ‘North Dakota Blues’ and ‘Diamonds and Gold’ are sealed in the vaults of excellence, it was listening to older tunes like ‘Memphis Train’, ‘Burgundy Wine’ and ‘Hey Julia’ which took the appreciation of Don to a greater level. This is a guy steeped in the country music song writing and performing tradition of Kristofferson, Nelson and Helm, with the added panache of being able to connect with audiences through an affable charm.

The rise of Don Gallardo is to the credit of UK label Clubhouse Records who smartly blend in distinguished US artists to energise their stable of British talent. It was Clubhouse who played a significant role in staging Tingestock alongside established promoters Empty Rooms. The latter have intermittently used this quaint English rural venue for a number of years and the overall presentation for the evening was first class, with a sound system superior to many likeminded operations on the circuit. Clubhouse also supplied a second band to the line-up in the guise of The Rosellys, a newly signed outfit to their roster. This five-piece combo headed by Simon and Rebecca Roselly unashamedly exalts an unrelenting love of American music through their identity, writing and style. Musically they peak with Simon’s fiddle playing and have evolved from a longstanding duo on the fringes of the circuit to a tight knit band capable of mixing it with the cream of British Americana.


Simon Stanley Ward is a unique performer with a golden innate quality to project a compelling song through an incredible voice extracted right from a hidden country soul. This set at Tingestock was a significant step up from his Maverick song writing circle appearance, suitably enhanced by a supporting show of fret manoeuvring magnificence from Aussie guitarist, and honorary Champ, Paul Lush. Simon reeled off three tracks from his debut self-titled album including the marvellous opening track ‘The Monster Song’ and is in such a rich vein of song writing that a few yet to be recorded numbers were aired, suitably spiced by the entertaining ‘Water’ and the painfully piercing ‘7 O’clock Alarm’. If the album was the discovery of Simon Stanley Ward and the Maverick slot the live introduction, this set was the blossoming and the effective launch of a performer equipped to go far.

It was difficult to ever recall seeing a UK stage frequented by a nine piece folk and roots band especially one with each member playing a different instrument. Oxfordshire based nontet Knights of Mentis filled this gig gap with the second set on the Tingestock line-up and gave a rousing synchronised performance best enjoyed when the pace reached crescendo levels. From memory and left to right, we witnessed and heard: harmonica, double bass, banjo, dobra, acoustic guitar, drums, fiddle, mandolin and accordion. If you add in the accordion player occasionally switching to piano, double figures in instrumentation was reached and this band certainly made their mark, both visually and audibly while justifying their inclusion to the programme.

Opening this extensive evening of primed entertainment was Luke Tuchscherer, who was reverting back to solo status after assembling his band for last week’s Maverick Festival appearance. Since being acquainted with Luke’s work nearly a year ago, it has been a treat to indulge in his intrinsic song writing and this is set to continue with the follow up record that he is currently fundraising for. Luke has mastered the art of the perfectly balanced set and once again this surfaced as Tingestock got underway. So for forty minutes we enjoyed a couple of songs from his solo debut (‘Three Long Days’ and ‘One of Us’) and four lined up for the follow up album including the very poignant ‘Amanda Jane’ and ‘Jack Brown’. Throw in the popular singalong Steve Earle cover ‘I Ain’t Ever Satisfied’ and a similar enticing Whybirds (Luke’s other band) number ‘Before I Go Crazy’, and the atmosphere was simmering with an appetite for a comprehensive evening of finely judged music coated with a country, Americana and roots gloss.

All parties involved with the preparation and execution of Tingestock met the succinctly simple, yet so often misfiring, objective of presenting a package of highly crafted music designed to raise the awareness of acts dedicated to their cause and malleable only to the echoes of their integrity. Tingestock is pure, untainted and does everything the right way. Long may this micro festival continue to flourish.