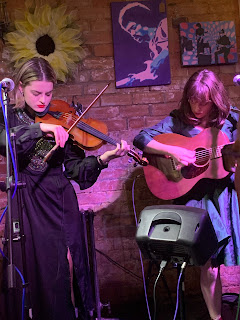 After wooing many folks far and wide during the extended Melbourne lockdown, Charm of Finches have finally took flight and landed their sumptuous harmonies on the shores of distant Europe. Prior to an extended run of dates in Scandinavia and the near continent, the UK is first stop for an inaugural visit and a chance for the sibling combo of Mabel and Ivy Windred-Wornes to enhance an already flowering reputation. Live streams proved the perfect selling medium for this folk duo immersed in observational singer-songwriter fare. However there is no substitute for that unfiltered in-person experience. One enjoyed by a Kitchen Garden audience often spoiled with such talent passing through the Birmingham suburbs.

The standard twin forty-five minute sets saw the sisters draw songs from multiple sources. As you would suspect, the riches of their two albums were mined with a particular focus on the latest WONDERFUL OBLIVION. Joining the recorded material was a song awaiting a title with invited suggestions and an apt cover of Leonard Cohen's 'Famous Blue Raincoat'. The latter's version can be found online and it is fitting for two sincere songwriters aspiring for greatness to feed off one of the finest.

Although the spellbinding harmonies adorn the headline praise for Charm of Finches, there is something utterly compelling in the detectable harsh Aussie brogue that lingers under the surface. This adds a steely inner to the overt beauty. Such strength is useful given the content of some of the songs. Mabel and Ivy frequently take the concept of the sad song to new levels. To counter the content, some therapy is a desired outcome especially when the loss is personal.

Musically, Charm of Finches are underpinned by Mabel's near continual delicate guitar strumming. Keys come a close second with both sisters taking turns to lead from this portable addition to the folk soundtrack. Ivy generally flickers between violin, played in multiple ways, and an expressive vocal style. Confidence and the flow of stories steadily increase across the sets with both sisters keen to share song inspiration and source. Mabel starts off as the main orator, but it is the dual power and grace of the sibling interaction that propels the duo into an ethereal trance.

Like all extensive touring schedules, it is hello and goodbye Kings Heath just as you revel in the warm glow of such fine music. Charm of Finches started this show with some dedicated fans in attendance. They departed with a whole informed band of admirers in tow. All no doubt besotted by those adorable harmonies. Just prior to returning back down under in a couple of months time, the sisters make a flying return to the UK taking in the Maverick Festival. Folks down Suffolk way that weekend are in for a real treat. The Moonshine late at night will be a special place to be.