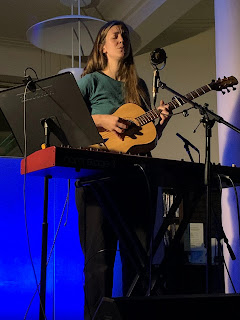 There are conventional gigs and those inspired to do things a little differently. While so much pleasure can be derived from high quality convention, a touch of deviation can inspire an awakening to the alternative places where musical art can take you. From the outset of the blue touch paper being lit on Jenny Sturgeon's latest project, the culmination was always likely to be an evening like presented in the English West Midlands tonight. The Living Mountain - a book by Nan Shepherd and an album by Jenny Sturgeon - transports the beauty, harshness and vibrancy of the Cairngorms to anywhere a mind opens its portal. This is just the starting point of a journey that terminates when the amalgam of inspired literature, gorgeously curated music and innovative filmmaking collide in a mosaic of integrated art.

Thimblemill Library bristles in an emporium of great writing and purveys a cultural air that aligns with sisterly art. The fit for Jenny Sturgeon to venture south from her Shetland home to share the sum of her version of The Living Mountain project was ideal. The core of the work is a full length 2020 released album nestling among the year's premium folk records that in itself brought a flavour of the Cairngorms to the fertile imagination of listeners hooked in by its luscious tone and associated field recordings.

The addendum is a hour long film produced by Shona Thomson, who spent many hours perusing the archives for footage that captured the essence of the Cairngorms from a scenic, natural habitation and human exploration perspective. Sprinkling in selective excerpts from Nan Shepherd's world renowned book, the film provided the backdrop to Jenny Sturgeon playing the entire record in its recorded form free of comment while seamlessly connecting the odd loops and switching between guitar and piano. Not only did you get a replication of the record in a form igniting fragments of your imagination, but the visual experience of some breathtaking and narrative images added an extra sensory layer to bring the full focus of the project into view.

Awareness of a need to share the context and an extra flavour of her career as a musician, Jenny spent the first thirty minutes of the evening spilling stories and playing a quartet of songs that did not appear on the album, but equally demonstrate what fires her as one of Scotland's most esteemed folk artists. Whether writing, playing a multitude of instruments or generating the most warmly pristine of accomplished vocals, the eminence was laid out before a sold out audience that eagerly bought into the musical offerings of Jenny Sturgeon.

Obviously the pandemic had delayed the road testing of this project by a near eighteen months. Even now it appears to be more prominent north of the border, but spreading of the positive word can only inspire further sorties south to share this outstanding piece of multi-media art.

This Thimblemill Library gig was designed to be the final destination of a personal autumn gig spine of similar artists that commenced with Hannah Rarity at the end of the summer before continuing with Siobhan Miller and Karine Polwart. This Scottish favoured folk quartet was further strengthened by Jenny visiting the area earlier in the month with her other band Salt House and John McCusker bringing his trio back to town.

When reviewing The Living Mountain in 2020 focus was lent towards the effect of the music on the listener rather than the wider Nan Shepherd literary influence. The turn is a full 180 degrees when absorbing the background through words and images. Both angles have illuminated the work of Jenny Sturgeon and those with whom she worked alongside to bring the project to fruition. Nights like this do not come around too often, and its uniqueness polishes a real gem in a gig memory bank packed with many outstanding evenings.