Album Review: Amy Speace - There Used To Be Horses Here 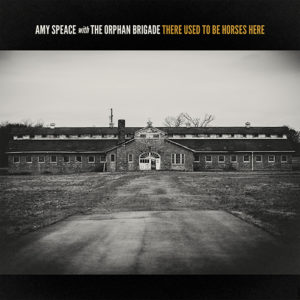 www.amyspeace.com
Cast a look at Amy Speace's back catalogue and a regular occurrence sees Neilson Hubbard in the producing role. This is not an uncommon scenario in the Nashville singer-songwriter community, but an interesting deviation has occurred in a case of role reversal for this latest record from an artist bestowed with a glowing maturity. Rather than just produce the new Amy Speace album (she ably assists on that front), Hubbard and his two colleagues - Ben Glover and Joshua Britt - aka The Oprhan Brigade have their name plastered across the front cover and provide a stunning landscape for another supreme set of songs to bloom in full glory.
The soundtrack which shimmers in grandeur and splendour is a key feature that separates THERE USED TO BE HORSES HERE and its predecessors. The constant of serenely curated songs has long been a staple of Amy Speace's work alongside a delivery that borders on theatrical. A suggested effect from her generic artistic background. The added inspirational dimension spilling out from contrasting events of a new born son and the death of a beloved father looms large in the eleven tracks providing the substance to the album; the odd one out being a cover of Warren Zevon's 'Don't Let Us Get Sick' rounding things off in the closing role.
Before the finale is reached, the listener is treated to heaps of full on nostalgia featuring strongly in songs such as opener 'Down The Trail', title track and lead single 'There Used To Be Horses Here' and the self explanatory 'Father's Day'. While on the topic of explicit titles, you probably know what to expect from 'Grief is a Lonely Land' before the heartfelt tones pierce the sound waves with a surprising shot of therapy.
Other key moments that fire up the impact of this album include the unmistakable voice of Ben Glover piping up on 'Hallelujah Train', the mandolin of Joshua Britt subtly beavering away in the background and some sumptuous strings occasionally filling the air. As we have come to expect, the extraordinary vocal command and control of Speace is omnipresent and forever injecting the appropriate degree of passion in each song.
Any songs that rise to the summit of an Amy Speace album have to be special beasts giving the sheer high standard of her stock. Two particular tracks that leave a lasting impression lie in the latter stages with the ear pleasing duo of 'Give Me Love' and 'Shotgun Hearts'. The latter recalling an earlier stage of her professional life when New York and all its colours was home.
As we roam from song to song with memories rich and varied, the soundtrack from The Orphan Brigade continues to illuminate the stage making this one of the premium releases to grace the market in the first few months of 2021. Amy Speace was one of the last American touring artists to visit the UK pre-pandemic including a long awaited Birmingham date. Despite this enforced gap of live interaction , the momentum built up from her growing appeal this side of the pond will only be boosted by the added presence of THERE USED TO BE HORSE HERE. While we wait for some resumption in this field, the beauty and prestige of a record swimming in excellence is there to be enjoyed on its pedestal and highly endorsed from these quarters. The trajectory of Amy Speace's work continues to soar and the term glowing maturity shows no sign of peaking any time soon.
David at 09:00
Share
‹
›
Home
View web version