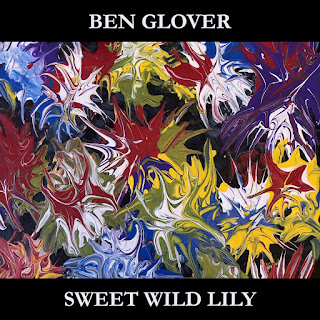 The work of Ben Glover, Gretchen Peters, Colm McLean and Kim Richey has been entwined on many levels over the last few years that it is of no surprise that all four names crop up again in one of the year's surprising yet so tantalising releases. It is not quite a case of getting the band back together after a long break, but the momentous effect of recent events makes it seem like an eternity since Ben was writing with Gretchen, touring and collaborating with Kim, and spectacularly calling on the exceptional guitar playing service of Colm.

Essentially SWEET WILD LILY is a Ben Glover release, but he has long made claim to being the king of the co-operatives, and all four names link up on this four track EP in some way or another. Let us begin not with the title track, but the release's most recognisable feature. Following in the footsteps of the menacingly dark 'Blackbirds', Glover has decided to record his own version of a Peters co-write, this time turning his distinct vocal style to the intriguing 'Arguing with Ghosts'. Both tracks had the honour of setting the scene in the opening salvo of a Gretchen Peters album and it is always fascinating to hear them in the rasp of a different voice. A true test of a great song is that you continue to explore its components long after first listen and a fresh take on it here shows no exception. To add an additional shine to the song, Kim Richey adds backing vocals here.

Of the three new songs springing into life on this EP, it is another Glover-Peters co-write that shoots to the fore. Fascinatingly, 'Broke Down' has lingered in the shadows for seven years, which makes you wonder what else might be lying in these songwriters' vaults. Giving this song a significant uplift is some gorgeous guitar work from Colm Mclean, obviously from afar, but this is not necessarily an obstacle in today's diminishing world.

In the same vein as the production role on the record (no Nielsen Hubbard this time), the source of the other two songs is solely down to Ben Glover, with the title track 'Sweet Wild Lily' leading the way in the video promotion of the full EP. 'Fireflies Dancing' brings up the quartet and another prime example of Glover's trademark marriage of road tested delivery and insightful songwriting.

There has been little fanfare accompanying SWEET WILD LILY just a welcome reminder why the music of Ben Glover has gathered recognisable momentum over the last few years. With the unearthing of gems like 'Broke Down', the first shots of the next album (whenever it will surface) have just rung out.