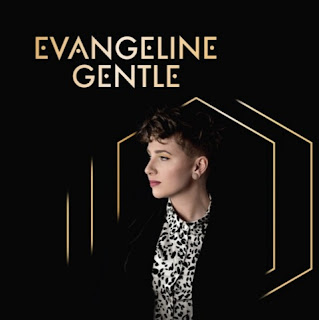 Taking the eponymous route for her debut album ensures hugely talented Canadian singer-songwriter Evangeline Gentle gets the sole spotlight. Even more so, not a second of exposure is wasted as the listener is taken on serenely intense journey of ten sumptuous songs. This piece of delicately crafted fine art pop entices the listener to access the inner mind of a sophisticated songwriter possessing the most alluring of voices. A deep groove is etched to convey a message fuelled by personal experience and a perceived ideal to seek solace in the art of song. You are clearly amid an artist rarely losing sight that leaving a warm glow in the hearts of the listener will open the door for a greater probe into the prose and reflection within the content.

To add some finer detail to the record, Evangeline Gentle hails from the Canadian version of Peterborough, in the province of Ontario. While her music is primed for the aesthetic side of the mainstream, it is more likely to be warmly received in cult areas of the wider folk and singer-songwriter scene where her pure qualities will resonate.

The beauty of this record is the everchanging rotation of favourite tracks within each play. Hearing Gentle’s luscious vocals in the opening song ‘Drop My Name’ makes you instantly fall in love with the voice, but it is quintet of amazing tracks from slot two to six on the CD/digital version that bring the record to life. Initially, it was the catchy single ‘Sundays’ and the slowly maturing ballad ‘The Strongest People Have Tender Hearts’ that held sway in the most endearing category, but quickly thereafter the delightful melodies of ‘Ordinary People’ and ‘Even If’ made significant inroads in cementing the album’s appeal. Drawing up closely with these frontrunners to make it an up-to-date version of the Famous Five as review deadline came was the captivating nostalgic ‘So It Goes’ with the obligatory nod to Springsteen in the chorus.

The slightly dampen things down a bit, the remaining four tracks do not have the same wow factor impact as their predecessors. You can kindly put this down to the lofty presence of what came before and they certainly keep the good vibes that define this record as a single play entity.

Gentle worked with distinguished fellow Canadian musician Jim Bryson on this album, which gets its release on Sonic Unyon Records and is likely to be as well received in the UK as in Canada and territories nearer to home. Incidentally, she was born on the north east coast of Scotland before emigrating West. Like many introspective songwriters, the themes are mostly drawn from personal experience so expect people, places, love, and idealism. The songs are littered with strong messages so listen closely; an experience made easier through the beautiful vocals.

Evangeline Gentle’s music will only need a slight nudge in the right direction as it has the legs to travel far on its own merits. This is a gorgeous album that heralds a talent with enormous potential, ensuring along the way that us listeners are blessed with some super sounds when we bend the ear a little.