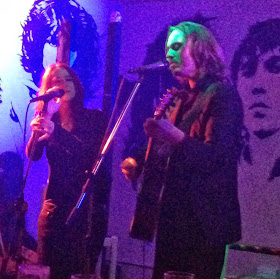 With their debut EP just about to be formally released, it was an ideal time to check out a live performance by UK based Folk-America duo The Black Feathers. Having been blown away by the five songs on their exceptional new record, it was hardly surprising to form the same opinion after enjoying this short set at the Tower of Song.


It was a lengthy wait to see Sian Chandler and Ray Hughes take to the stage as they were officially the guests of the Rea River Roots club who hosted the evening. The format of this regular gathering is to run an open mic session for local folk and roots enthusiasts before introducing the main act around 10 pm. The diverse range of performers kept you suitably entertained before The Black Feathers elevated the quality level considerably straight from the off with their opening number ‘You Will Be Mine’.

In the current vogue style of two voices and a single guitar, The Black Feathers showed they were the masters of such delivery with the key redeeming feature being their ability to beautifully harmonise in unison. The duo eased their way through an all-to-brief set with Ray’s guitar work steering the songs that are brought to life by the elegant vocals led by Sian. The pure emotion and subtle timing of their song delivery is as evident as the enjoyment radiating from their onstage chemistry. The acrimony that surrounded the recent split of that  famous duo in Americana circles from across the pond seemed a million miles away from what was on stage tonight. There is definitely no apology in this quarter for raising the comparison between The Black Feathers and The Civil Wars. 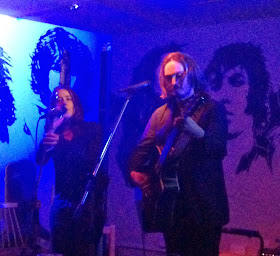 After the opening song, Sian and Ray proceeded to give a preview to all five tracks on the STRANGERS WE MEET EP with perhaps the most striking version on the night being ‘Open Book’. Yet really there was little to choose between this, the title track, ‘1000 Times’ and ‘All Came Down’. A couple of copies were sold during the evening and grabbing one yourself is highly recommended in whatever format that it is available in. To complete the set the guys did a great song called ‘Down By The River’ and they covered Lady Gaga’s ‘Bad Romance’.

The Black Feathers are just concluding a short jaunt around the country promoting this record but loads more dates are promised in the future. They have some exciting plans and a sound that will go down well in the US, a market on their horizon. In the meantime checking them out either on record or live is a must for any fan of folk or Americana music. They are a talent to be cherished and proof that this genre of music is flourishing in the UK.

Review of Strangers We Meet EP