I am sure Gretchen will not mind this review opening with a small tribute to the contribution made by Christine Bougie to her live shows over the last eighteen months. Having seen Gretchen many times, either on her own or just with Barry, the addition of Christine at the start of the Hello Cruel World Tour has really been the icing on the cake. Whether offering up some luscious lap steel, tender percussion or backing bass, the wonderful songs composed by Gretchen are brought to life and allowed to flourish in a sound reminiscent of their Nashville,Tennessee origin. On her homeland’s national day, Toronto based Christine gave a sublime performance, excelling on many songs notably ‘Idlewild’ and ‘To Say Goodbye’. Having previously worked with the Good Lovelies, she is set to link up with Madison Violet in the near future and is surely a much sought after talent.

‘Hello Glastonbury’ was how Gretchen greeted the Bromsgrove crowd, one that were probably more akin with the late Davy Jones’ Monkees rather than the Arctic Monkeys. Incidentally, she covered ‘Last Train to Clarkesville’ in Bilston last year as a tribute to Davy but it was a return to the regular covers for this show. The high of appearing at one of the world’s premier music festivals 24 hours earlier had clearly not yet worn off for Gretchen. Having shrugged off the disappointment of not sharing ‘Wild Horses’ with Mick, a more than able deputy stepped up in support artist Ben Glover, who had previously warmed up the audience with his affable brand of country tinged singer-songwriter music. Ben also satisfied Gretchen’s appetite for a Gram Parsons duet, with ‘Return of the Grievous Angel’ being every bit as good as their Couch by Couch West video offering.

The well appointed and spacious Artrix Arts Centre was honoured to host this 'farewell to the UK for now' gig and the final time Gretchen will base a UK show around her outstanding album HELLO CRUEL WORLD. That is until she returns for its 20th anniversary celebration in 2032! It was fantastic to hear these timeless songs in four different venues on each of the last few tours and it is credit to the Artrix that the sound here was as good, if not better, than anywhere else. There is the promise of more to come from this venue and there is definitely a potential to host further touring acts and become a prominent country, roots, folk and Americana venue in the western part of the Midlands.

All the old favourites have now been restored to the set list since HELLO CRUEL WORLD was played in its entirety on the first tour. The solo piano re-working of ‘Independence Day’ has breathed new life into a classic song while any version of ‘Secret of Life’ is welcome in my book, either Gretchen’s slowed down original or Faith Hill’s punchy upbeat hit. Whenever ‘On a Bus to St Cloud’ is played there is an overwhelming desire to close your eyes and let this masterpiece majestically take you on a moving journey. An interesting addition to this evening’s show was ‘When You Are Old’, which received a nod of approval from many audience members. 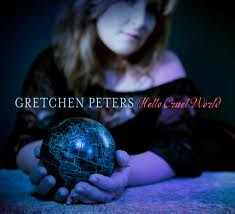 It’s been a pleasure to listen to Gretchen Peters, Barry Walsh and Christine Bougie, share the fruits of one of the finest contemporary singer songwriters operating out of Nashville, in the clubs, halls, festivals and theatres of the UK. A well deserved break and hopefully a re-connection with her creative genes is central to the agenda now and thus we must patiently wait for the next UK visit. So whether it is another Wine Women and Song outing or the tough follow up to HELLO CRUEL WORLD, the countdown has begun.